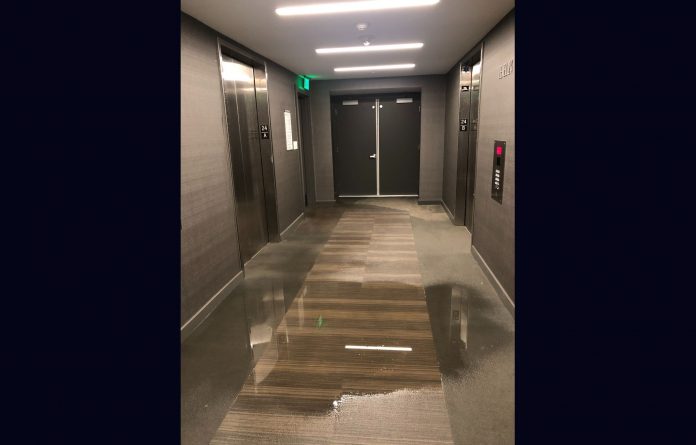 Flooded SoMa High-Rise Tenants Say They Had Hotel Rooms Revoked, Now Forced to Fend for Themselves

SFist has exclusive pictures and video from inside the flooding of apartment tower 33 Tehama, but more troublingly, emails showing that several tenants’ temporary hotel accommodations have already been rescinded.

On Monday we reported on the flooding and subsequent evacuation of 33 Tehama, a four-year-old, 35-story, 383-unit apartment building on Tehama Street between First and Second Streets. Since then, SFist has received a slew of firsthand photo evidence and video from residents who saw the water carnage allegedly caused by a burst water pipe somewhere near the roof level.

In the immediate aftermath of the building’s flooding, the Chronicle reported that the property managers had secured “hotel rooms near Union Square” so the displaced residents had a place to stay, and that “their hotel reservations had been extended until Friday.”

But apparently that statement is no longer operable. Many 33 Tehama residents are now fuming because they tell us their hotel reservations abruptly ended with little notice Monday morning at 11 a.m. KGO confirms that the “hotel front desk staff told them the rooms are only paid for through 11:00 a.m. Monday,” and NBC Bay Area’s Sergio Quintana also adds that some displaced tenants “have to move again because rooms had been booked for a convention.”

It’s insane now. It’s 10am and checkout is 11am. And no hotel extension@Hines is plugging their ears at Tehama. They’re about to displace everyone a second time in 72 hours. Families. ADA folks

SFist has obtained the ‘bad news’ email sent by 33 Tehama management, sent at 9:31 p.m. Sunday night — less than 14 hours before the displaced tenants would no longer have a place to stay. “Many of you have been placed at either the Hilton or Union Square or Parc 55 at this point,” the email  says. “Due to prior booking at these hotels, some residents may need to relocate tomorrow or in the coming days.”

“We are going to have places for people to stay every day. Unfortunately we can’t guarantee that it’s in the same place [each day],” said a building spokesperson speaking to KPIX

It is true that the RSA Conference is in town right now, and as such, hotel room prices are currently off the charts — maybe at one of their highest rates in three years. Tenants say they’ve been offered a $300 voucher per night for a room. But we checked Expedia (top results seen above), and the vast majority of San Francisco hotel rooms are well above $300 per night this week.

KPIX has some footage of that tense exchange, seen above, and spoke to many of the angry displaced residents. Understand that many of them did not even know where they would be sleeping that night, and did not have a place to stay.

In this email will it be covered why some residents are displaced with no accommodations made? I’m a middle school teacher and they canceled our hotel room today, didn’t let me know, and did not find us a new accommodation.

You may be tempted to say that these are “luxury” or “upscale” apartments, so these tenants can well afford to deal with their displacement. That’s not always the case. In compliance with San Francisco affordable housing laws, a good portion of that building is set aside for below-market rate housing. 2017 Planning Commission documents detail that the property has “319 market rate units and 60 moderate income affordable inclusionary units,” so we’re talking 15.8% affordable units. And one of those tenants is reportedly a cancer patient.

“She was really concerned about paying for food,” Patterson tells SFist. “I talked to another mom who is concerned about her children and school. She was frustrated that she had to spend so much money on this now. The building offered them bagels.”

The apartment complex name “33 Tehama” sounds like any old generic name for a San Francisco apartment building based on an address. But its backstory, and current story, involve some names with which you may be familiar.

33 Tehama was originally called 41 Tehama when it got its permits back in 2012 and 2013. It was the brainchild of local developer Bob Tandler, who is better known for his philanthropic efforts. He serves on the board of the SF General Hospital Foundation, who bring us those beloved Hearts in SF sculptures every year, and he’s also on a ton of other charity and nonprofit boards. If you’re extremely online, you may be familiar with his daughter Michelle Tandler, one of Twitter’s most vocal advocates for the recall Chesa Boudin discourse.

Bob Tandler sold the property for a reported $48.5 million in 2014, according to the SF Business Times. The buyers were real estate investment firm Hines, who are also developing a large complex at 50 Main, whose size could rival the Salesforce Tower. Hines, and their equity partner Invesco, turned 41 Tehama into the 33 Tehama complex that we know today.

“This is not a Ma and Pa landlord, this is Hines, a $90 billion corporation,” Patterson tells SFist. “And they’re not taking care of us.” (To clarify, Hines does have a reported  “more than $90 billion of investment assets.”)

Patterson also says this is not the first time he’s been displaced by flooding at 33 Tehama.

“We were relocated to another unit in the building. The building would tell us, ‘It’s going to be done tomorrow,’ but we’d hear nothing all day the next day. They burst into our unit and asked why we were still there, and then said [our previous apartment] was done. We went down to our apartment, it wasn’t done. The floors were still ripped up.”

But this particular incident has displaced the entire building, many of whom do not even know where they are going to spend the room tonight, and are left to figure that out for themselves.

“I don’t know if I’m going to have housing tomorrow, and $300 is not going to cut it,” he says. “We all are in a tough spot. People are parents, people have disabilities, people have pets. There are so many variables to this community that people demand to have stable housing and notice to relocate.”

There are likely more awful inconveniences on the horizon here. Tenants haven’t even started navigating property damage and renter’s insurance claims, so there are likely nightmares waiting to unfold there. And this sounds like one of those high-profile cases where the Board of Supervisors is likely to step in and hold some kind of hearing.

But those are issues that will come to light in the months to come. For now, many 33 Tehama tenants don’t even know where, or if, they will have a roof over their heads tonight.