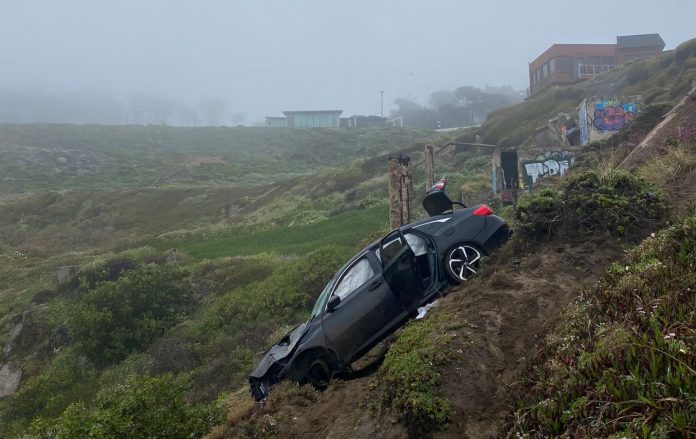 Authorities have not said that alcohol or Cinco de Mayo partying had anything to do with it, but a car with four adults in it missed a bend in the road or something and went off a cliff near San Francisco’s Ocean Beach.

The crash occurred around 2:53 a.m. on Point Lobos Avenue, across the street from the Point Lobos parking lot. As the San Francisco Fire Department reported, the car was traveling at an unknown speed and went off the road, plunging 30 to 40 feet down the cliffside. The section of cliff in question is a short distance uphill and around the bend from the former Cliff House.

All four were rescued, with two people in the car listed as stable and two in critical condition.

As NBC Bay Area reports, it was not immediately clear to first responders if drugs or alcohol figured in the crash.

Photos show the car just beside the ruins of the old Sutro Baths — and they show the car came to rest in a sand outcropping, preventing the car from plunging much further down to the ocean.