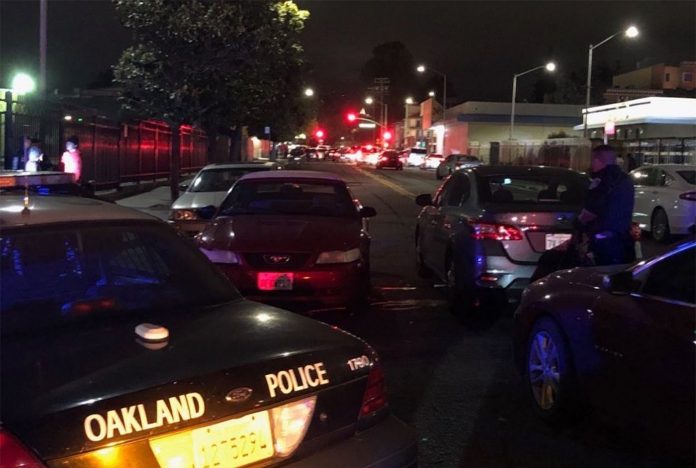 Sideshow events erupted in the East and North Bay on Thursday night, as revelers came out to celebrate Cinco de Mayo in full force — and a massive sideshow in Santa Rosa ended with one man getting shot multiple times.

Spring brings warmer weather, and here in the Bay Area, typically, weekend sideshows with cars spinning doughnuts, and sometimes automatic weapons being shot into the air, music-video style. San Francisco saw three sideshows in different neighborhoods last weekend, and on Thursday night, since it was Cinco de Mayo, it stands to reason there would be more.

Video shows Oakland police intervening to shut down a sideshow and search a vehicle on International Boulevard near 28th Avenue Thursday night. (The Twitter caption says Telegraph Avenue however that building in the background indicates otherwise.) KRON4 reports that “dozens” of cars were towed after police shut the event down, but it’s not clear how many cars had been involved or when the sideshow started.

Sideshows during Cinco De Mayo in Oakland end with OPD blocking off streets on Telegraph Avenue, searching vehicles one by one and towing dozens of cars. pic.twitter.com/sIzATNqRRO

OPD is actively towing several dozen vehicles that were engaging in sideshow activity this evening.

If you have info about illegal sideshows send a tip to our non-emergency email sideshowtips@oaklandca.gov pic.twitter.com/x5iGKE0iFO

A separate sideshow appears to have occurred in Downtown Oakland, possibly on Telegraph, as seen below.

I got caught in a #sideshow in Downtown Oakland.

Easily went through it, because ya know—bikes 🚲don’t cause traffic and burning rubber) lol 🧵 pic.twitter.com/CwxxgpjFyJ

Oakland police have been taking a harder line on sideshows, they say, working to deter them from occurring each weekend, and often taking down license plates and later tracking down vehicles at residents’ homes to tow them when they’ve been documented engaging in illegal activity.

In Santa Rosa Thursday night, as KRON4 reports, around 200 cars and 750 people gathered in the area of Sebastopol Road at West Avenue starting at 7:30 p.m. Police initially could not approach the scene because of the volume of cars blocking the intersection, but later tried to intercede.

Santa Rosa police say that two and a half hours later, around 10 p.m., a 22-year-old “sustained multiple gunshot wounds to his lower extremities,” and he was taken to the hospital in critical condition. He is expected to survive his injuries, however.

As the video below from the Press Democrat shows, this wasn’t just a sideshow, it was an outdoor Cinco de Mayo party complete with a fireworks show.

Multiple law enforcement agencies ultimately had to work together to disperse the sideshow and its attendees.

“Public safety is our priority,” said the Santa Rosa PD in a release. “The Santa Rosa Police Department will continue to work with our law enforcement partners on a proactive response to prevent sideshow activity in Sonoma County.”