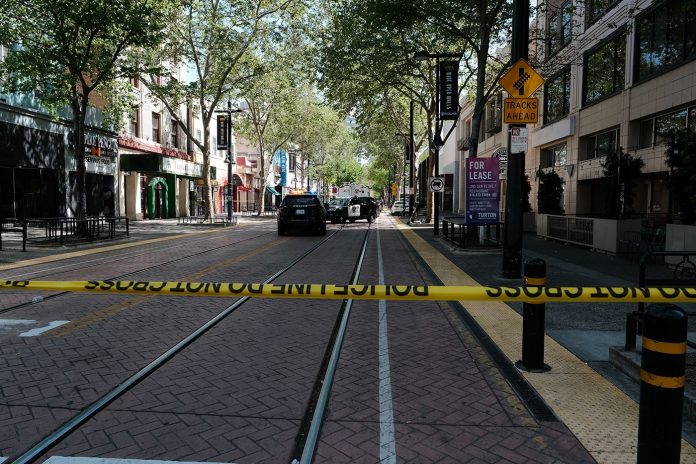 The shooting with mass casualties that occurred in downtown Sacramento early on the morning of Sunday, April 3, and which was quickly determined to be a case of gang warfare with hundreds of bystanders present, had four suspected gunmen. One of them died in the shootout, and the three others were officially charged with murder on Tuesday.

Sacramento County District Attorney Anne Marie Schubert announced the murder charges today against Smiley Martin, Dandrae Martin — the two brothers who were arrested early in the investigation — and 27-year-old Mtula Payton. Payton was identified as a suspect nine days after the K Street shooting, and still remains at large despite multiple attempts by police to locate him.

As the Associated Press reports, court documents referred to Smiley Martin, 27, as an “unrepentant” gang member with a “lifetime commitment to violence.”

Martin was among the dozen people wounded in the melee, and CapRadio reported that he was moved from a hospital into jail as of April 21. Police found over 100 shell casings at the scene of the shooting, and court documents say that 28 of those are believed to have come from Martin’s gun.

Schubert’s office now says they believe there were only four shooters — not five or more, as was initially reported.

The fourth shooter, 29-year-old Devazia Turner, was among the six people who died. Besides Turner, the other fatalities that night were Sergio Harris, Joshua Hoye-Lucchesi, Johntaya Alexander, Yamile Martinez-Andrade and Melinda Davis.

Per the AP, authorities now say that Harris and Hoye-Lucchesi were also involved in the dispute that erupted between the Martins, Payton, and Turner.

As SFist previously reported, both the Martin brothers have done time for violent offenses. Smiley Martin had just been released from prison in Sacramento County in 2021 as part of an early-release program from a 10-year sentence he’d received in 2018 — a release to which Schubert’s office was vehemently opposed. And he was allegedly seen in a live Facebook video brandishing a weapon in the hours before the shooting.

Dandrae Martin had been released from prison in Arizona in 2020 for an aggravated assault case involving a woman he was reportedly trying to force into prostitution. His brother’s case also involved violence against a woman being forced into sex work.

Both brothers are expected back in court on May 27.