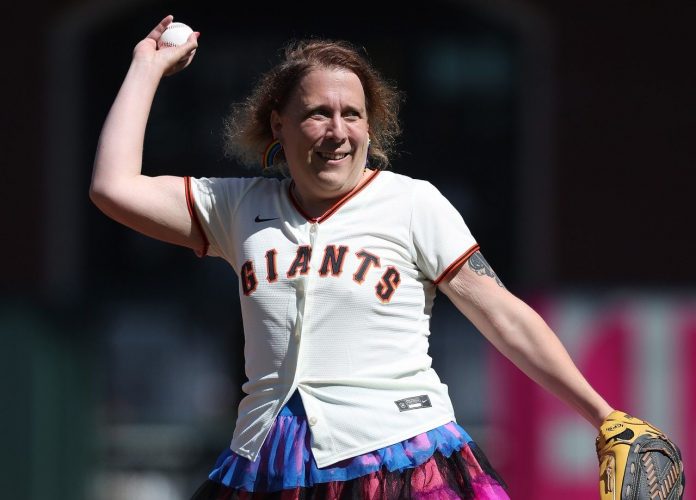 When your San Francisco Giants beat the Dodgers 3-2 Saturday night at Oracle Park, it wasn’t just any game; it was the historic Pride Night game where, for the first time in Major League Baseball history, both teams were wearing the Progress Pride flag on their team logos. And to mark the occasion, the Giants brought out Oakland Jeopardy! hero Amy Schneider, the openly trans woman who is the second-winningest contestant in the history of the show.

But as NBC News reports, the game’s broadcaster Fox Sports refused to show the trans woman Schneider throwing that pitch. They did show a first pitch, alright, but instead showed NASCAR driver Kurt Busch throwing the first pitch, using footage that was two days old.

First, we’ll show you what the Fox Sports network wouldn’t show you. Above we see Schneider throwing the first pitch from Saturday night at 7:15 p.m. PT, in footage taken by The Athletic’s Andrew Baggarly, presumably from the press box. You can hear Renel announcing Schneider, you can hear the crowd go wild for Schneider, and you can see her throw a pitch that comes respectably close to home plate, resplendently wearing a trans flag-colored tutu with a Giants jersey.

Compare this to what television viewers were shown on Fox Sports, as we’ve embedded above. Viewers are shown NASCAR driver Kurt Busch throwing out a first pitch, in footage that was taken the previous Thursday from a Giants-Rockies game. Fox Sports announcer Adam Amin very misleadingly tells viewers, “Kurt Busch threw out the first pitch. Of course, we’ve got the NASCAR race tomorrow coming up from Sonoma. You’ll see that on the Fox networks.”

Yes, it is true that sister network Fox Sports 1 would be broadcasting the NASCAR contest Toyota/Save Mart 350, which happened here in the Bay Area at Sonoma Raceway the day after this game. And sure, the networks love to do these “synergy” promotions where they hype some other show that will be broadcast by them or one of their sister networks.

Still, you can’t help but conclude there is at least a touch of transphobia here that the Fox Sports network (which is not the Fox News network, but they’re still all owned by ultraconservative Fox News/News Corp. CEO and chairman Rupert Murdoch) wanted no part of showing a trans woman in a tutu throwing out the first pitch, let alone with a sold-out crowd roaring with approval at the sight of this.

Instead of carrying her toss during Saturday’s Dodgers-Giants telecast, NASCAR driver Kurt Busch was shown in a pregame ceremony — from Thursday.
https://t.co/79i7npL1rf

These MLB broadcast TV deals are difficult to explain, but let me try. The vast majority of Giants games are broadcast on TV regionally on something called NBC Sports Bay Area (formerly Comcast Bay Area), where you hear the familiar voices of Kruk, Kuip, and Jon Miller. But certain very high-profile games might be broadcast nationally on ESPN or the main Fox network, and other choice games are covered regionally by quasi-channels like Peacock, or in this case, the Fox Sports network.

“I wanted to make a correction from what I watched yesterday on the Fox broadcast,” Giants broadcaster Duane Kuiper said on-air during Sunday’s NBC Sports Bay Area broadcast, according to an NBC Sports transcript. “The broadcast implied that Kurt Busch threw out the first pitch yesterday, which was not true.”

“It was Amy Schneider from Jeopardy! fame who threw out the first pitch on Pride Day yesterday,” Kuip added. “So I just wanted to make sure she got her due.”

To answer your question: No, the TV networks do not always show the first pitch of an MLB game. They generally save this for special occasions, like the Bryan Stow first pitch seen above, after Stow had been beaten and permanently disabled in a 2011 fan attack at Dodgers Stadium. But in this case, Fox Sports did choose to broadcast a first pitch, and consciously chose one from the wrong day, intentionally misleading viewers.

SAN FRANCISCO, CALIFORNIA – JUNE 11: Amy Schneider throws out the ceremonial first pitch before the game between the Los Angeles Dodgers and the San Francisco Giants at Oracle Park on June 11, 2022 in San Francisco, California. (Photo by Lachlan Cunningham/Getty Images)

SAN FRANCISCO, CALIFORNIA – JUNE 11: Amy Schneider throws out the ceremonial first pitch before the game between the Los Angeles Dodgers and the San Francisco Giants at Oracle Park on June 11, 2022 in San Francisco, California. (Photo by Lachlan Cunningham/Getty Images)