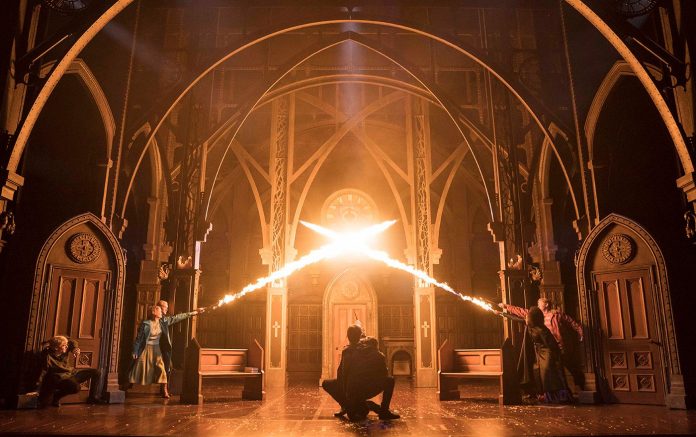 We thought maybe it would be there forever, but Harry Potter and the Cursed Child is winding down its lengthy — albeit interrupted — run at the Curran Theater in September after 393 performances.

Ambassador Theatre Group (ATG) either has plans to bring another big show to the Curran, or this cast of Harry Potter and the Cursed Child is headed to another city to inspire and excite Potter fans elsewhere. In any event, the Curran website declares today that the show “must end September 11,” so if you haven’t seen it yet and were planning to, now’s your last chance to snag tickets. (Potterheads around the Bay may now rush to go see it again, now that the run has an end date.)

The production is being touted as the “longest-running play in San Francisco history,” which appears to be a distinction from “longest-running show” or musical — that honor goes to The Phantom of the Opera, which played at the Curran for five straight years from 1993 to 1998, a total of 2,102 performances.

“We are extremely proud of our San Francisco production,” say producers Sonia Friedman and Colin Callender in a release. “To be the longest running play in the city is an amazing achievement. We would like to thank all our cast, company and creative team for getting us to this incredible milestone. There is a rich culture of arts and theater here, and we extend our heartfelt thanks to San Francisco audiences for embracing our play.”

The press release suggests that “Exciting details about future productions rolled out across the US will be announced at a later date,” which hints that this particular cast and crew may be on the move. Productions of the Tony-winning play, which all were condensed from a two-night, two-part show to a one-night show when they reopened last fall and winter, are ongoing in New York, London, Toronto, Melbourne, Hamburg, and Tokyo.

Harry Potter and the Cursed Child first opened in previews at the Curran on October 23, 2019 — and SFist reviewed the two-part version of the show after the press opening in early December. The show temporarily closed along with all theater at the start of the pandemic in March 2020, and reopened as a one-parter, in previews, in January 2022.

The one-part version of the show, which is just as chockfull of magical stagecraft and visual trickery as the original, cuts down heavily on exposition in the first act — which may work for some but it leaves the plot feeling a bit rushed and confusing.

Ambassador Theatre Group, the British outfit that now operates both the Orpheum and Golden Gate theaters under the auspices of BroadwaySF, does not own the Curran but has been leasing it from owner Carole Shorenstein Hays since Harry and the gang moved in three years ago.

Ms. Shorenstein Hays reopened the Curran in 2017 after a major renovation, but soon ran afoul of her former partners, the Nederlander Organization, with whom she had been running SHN SF for decades before parceling off the Curran for her own creative endeavors. As part of an agreement when Shorenstein Hays departed SHN, the Curran was not supposed to stage big Broadway touring shows in competition with SHN — Shorenstein Hays had expressed the intention of bringing less commercial, smaller shows directly from New York and elsewhere. But booking Dear Evan Hanson and some other shows led SHN to file a lawsuit in Delaware Chancery Court — the same court where Twitter is suing Elon Musk now — which Shorenstein Hays ultimately lost in Delaware Supreme Court.

But the Nederlanders aren’t operating in SF anymore — they reached a settlement in 2019 that allows Shorenstein Hays to compete as she wishes — and with ATG now at the helm, it’s unclear how long Shorenstein Hays plans to continue leasing the Curran to them now that this show is done.

Related: ‘Harry Potter and the Cursed Child’ Still a Wonder of Magical Stagecraft, If a Little Rushed With the Storytelling

Facebook
Twitter
Pinterest
WhatsApp
Previous articleBob Weir To Ring In His 75th Birthday With a Three-Night Set at the Warfield
Next article‘Follies’ at SF Playhouse Is a Heartening, Showstopping Smash