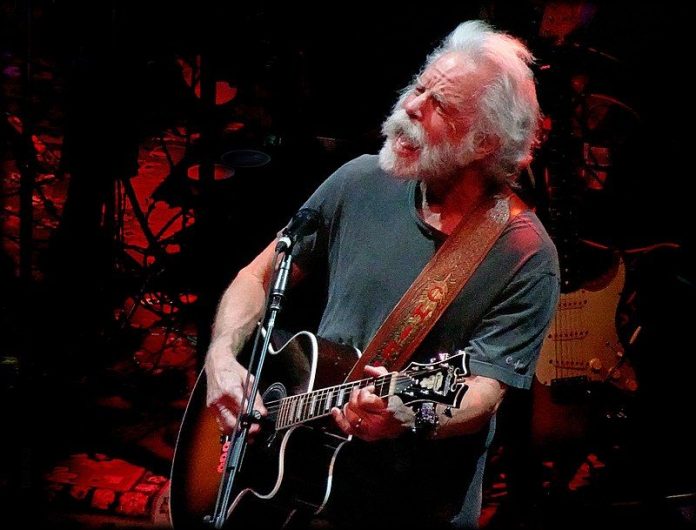 Bobby turns 75 in October, and he’ll treat his hometown to three performances at the Warfield along with his latest band Wolf Bros, with tickets going on sale Friday.

San Francisco-born Grateful Dead founder member Bob Weir has enjoyed a Rock & Roll Hall of Fame career, and still keeps a house in Mill Valley. He’s known to turn up for surprise guest sets at Hardly Strictly Bluegrass, and in 2019 joined Paul Simon onstage for a memorable finale at Outside Lands. And he’ll return to San Francisco for a milestone birthday this October, as the Chronicle reports Bob Weir will play a three-night set at the Warfield for his 75th birthday, with his latest outfit Bobby Weir & Wolf Bros.

According to an announcement on his web page, the lineup will include Don Was (Was (Nor Was)), Jay Lane (RatDog, Primus),  Jeff Chimenti (Furthur, Dead & Company), and special guest Barry Sless.

This is all just their standard fall tour which runs from late September to early November, with a big 75th birthday in Bobby’s hometown nestled in. Regrettably, this tour schedule tells us with certainty that Weir will not be pulling a surprise cameo at Hardly Strictly Bluegrass this year, as the tour dates have him in Connecticut and Washington, D.C. on the dates of the festival.

For a general life check-in on Bobby’s career as we approach his 75th birthday: We still don’t know who will play him in the Martin Scorsese Grateful Dead biopic that’s already cast Jonah Hill as Jerry Garcia. But according to a recent Wall Street Journal profile, Weir is otherwise working on an opera, and a stage musical about Negro League and Cleveland Indians pitcher Satchel Paige.

Related: Perfectly Timed Rainbow Over Grateful Dead Show Had Fans Debating Whether It Was Real [SFist]

Facebook
Twitter
Pinterest
WhatsApp
Previous articleDave Chappelle Doing Series of North Bay Gigs This Week, LGBTQ Activists May Protest
Next article‘Harry Potter and the Cursed Child’ to Close at the Curran In September