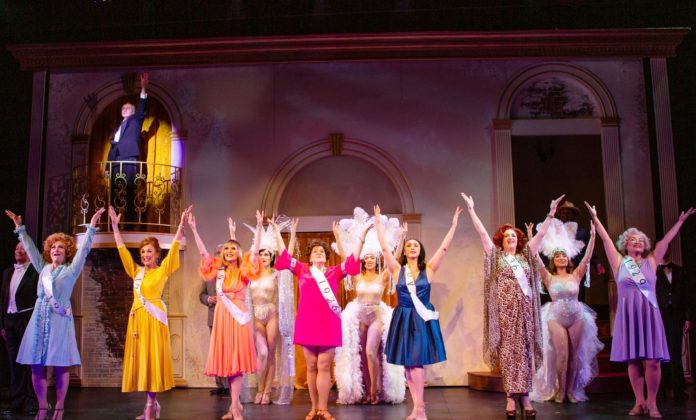 ‘Follies’ at SF Playhouse Is a Heartening, Showstopping Smash

The not-often-performed Sondheim musical that brought us such timelessly classic songs as “Broadway Baby” and “I’m Still Here” is being staged this summer by the always nimble and impressive SF Playhouse, and it’s a joy to behold.

Whether you’re a Sondheim fanatic or not, you likely have heard some of the music from 1971’s Follies, likely in another context and you may not even have known that it was from a show. “I’m Still Here” has been a standard of drag queens, veteran Broadway belters in concert, and certified divas for decades — and it made for a seminal moment in 1990s cinema when Shirley MacLaine, in a loosely disguised impression of Debbie Reynolds, banged on a piano and belted it in a party scene in Postcards From the Edge.

Lyrics for the song have been added and revised for specific singers — Sondheim wrote a few lines specific to MacLaine’s character for the film, and Barbara Streisand had her own version too. Elaine Stritch sang it in her one-woman show 20 years ago and she told Sondheim no one had the right to sing it until they hit age 80. But it’s a song whose sentiment can be applied to any number of performers, and the theme of being a resilient hoofer who’s lived a long and checkered life and still come out OK is something many can empathize with.

In the SF Playhouse production that opened last week after some COVID-related delays, it is sung by longtime SF performer Cindy Goldfield, who imbues it with plenty of world-weary gravitas and still-simmering pride. And when she sings the line, “I got through all of last year, and I’m here,” it marks one of many moments in the production where Sondheim’s words and those of book-writer James Goldman resonate in the present day with satisfying power.

The line drew a knowing chuckle from the audience the night I saw Follies, but the song-and-dance moment that was perhaps the most moving, delightful, and cathartic comes just before it. That’s when the main cast of former Weissman Follies girls, gathered for a reunion as the New York theater they once performed in is being torn down, strap on tap shoes and reluctantly, at the insistence of one of the elders in the bunch, reenact their old group number “Who’s That Woman?”

The image of these women, these stalwart characters in their 50s and 60s, alongside their glamorous, ghostly showgirl selves from memory, slogging through this tap number that becomes a full, stage-spinning, kick-line affair, will make you laugh through complicated tears. It’s a moment that encapsulates the best of this show’s long view of people’s lives, the triumphs and disappointments of love and career that many of us endure, and how sometimes our better selves can come together for one, glorious, nostalgic romp and remind us who we are.

The fact that I’ve made it this far in the review without mentioning the ostensible main plot of the show or its four central characters speaks to what I think the bigger draw is, which is the ensemble and the quirky delights provided by the supporting cast, each of whom gets to shine only in Act I.  Lucinda Hitchcock Cone shines in her brief moment with “Broadway Baby”; Jill Slyter as the French woman Solange LaFitte is pitch-perfect on “Ah, Paris!”; and Caroline Louise Altman is terrific leading “Who’s That Woman?”

But the leads are strong in this production, even if their love quadrangle plot line always felt a bit shoehorned in and secondary to the ensemble show. As Sally, Natascia Diaz is marvelous in many moments, but especially when she gets to sing one of Sondheim’s most wrenching ballads in Act 2, “Losing My Mind.” And as Phyllis, Maureen McVerry — who some might recognize from playing the third-grade teacher to the Olsen twins on Full House — is polished throughout and fun to watch, and she gets her moments with two classic songs, “Could I Leave You?” and “The Story of Lucy and Jessie.”

As the male leads, Anthony Rollins-Mullens is great as Buddy and Chris Vettel holds his own as Ben, but this show is mostly centered on the ladies.

The show ends with a series of “follies,” musical numbers modeled on vaudeville that are meant to reflect the four main characters’ predicaments and their past entanglements. And it concludes with a sense of half-hearted resolution — while it appears throughout to be the rare American musical that ends in two divorces, it stops short of that and our two couples go home to their complicated and dissatisfied lives.

Once again, director and company artistic director Bill English proves that an ambitious musical can be successfully staged on SF Playhouse’s compact proscenium — and he assembled a cast of actor-singer-dancers for this two-year-delayed production that is equally impressive. And second only to his production of Sunday in the Park With George four years ago, this is one of best re-stagings of a Sondheim show that SF is likely to ever see — scrappy and lean as it may be.

Facebook
Twitter
Pinterest
WhatsApp
Previous article‘Harry Potter and the Cursed Child’ to Close at the Curran In September
Next article[Updated] SF to Get 10,000 More Monkeypox Vaccine Doses; Available Doses at SF General Out on Wednesday