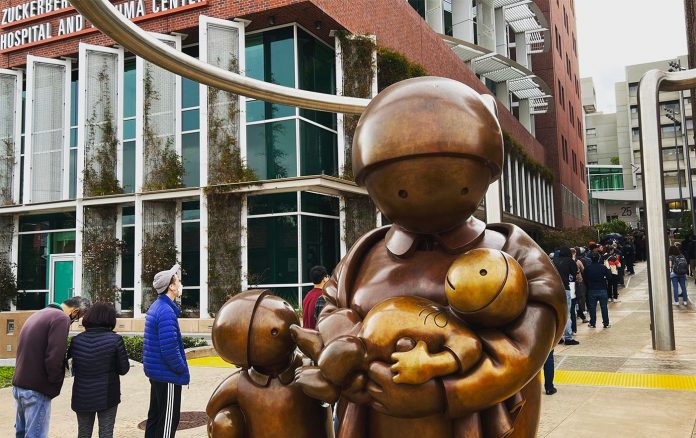 [Updated] SF to Get 10,000 More Monkeypox Vaccine Doses; Available Doses at SF General Out on Wednesday

You can still get a monkeypox vaccine if you want or need one this week, either through a clinic appointment or at the drop-in clinic at SF General, but the doses from the latest federal allotment are likely to run out again before the end of the week. A new allotment is on its way soon, as well.

Following a weekend that, for some in the gay community, included some hard-partying and Dore Alley Fair cavorting, there was once again a huge line outside Zuckerberg SF General Hospital Monday morning for available monkeypox vaccines on a drop-in basis. The drop-in clinic may have one of the larger allotments of doses coming from the feds, however this is not the only way to get a vaccine — the SF AIDS Foundation’s Strut clinic in the Castro has been doing vaccines by appointment, so has SF City Clinic, and both Kaiser members and non-members can call Kaiser’s vaccine clinic for an appointment. UCSF patients can also get vaccines through that health system — find all the necessary numbers here.

On Tuesday, the SF Department of Public Health announced that the city is getting 10,700 doses of the Jynneos vaccine in its next allotment, at a date not yet determined. In a tweet, the department thanked Governor Gavin Newsom “for declaring a state of emergency and all of those who have been advocating on the behalf of SF.”

“This is more than double of what we’ve received in previous allotments,” the department tweeted. “There is no date yet for the arrival of this allotment. We will let the community know when it becomes available.”

2/2 We want to thank Gov. @GavinNewsom for declaring a state of emergency and all of those who have been advocating on the behalf of SF: @SpeakerPelosi Mayor @LondonBreed Sen. @Scott_Wiener Sup. @RafaelMandelman Sup. @mattdorsey @SFAIDSFound @ZSFGCare

The city’s last allotment, which arrived this week, was 4,200 doses. The SF General clinic administered 950 of those on Monday, and another 650 on Tuesday before the clinic closed at noon. “All walk-ins received a vaccination,” DPH said, adding that the clinic would reopen Wednesday at 8 a.m.

A tweet from the SF Sheriff’s Office, which provides security at SF General, suggested that there were around 2,000 doses available this week at that clinic. Doing the math, that means around 400 remain for Wednesday, and the clinic may then close again Thursday if all those are exhausted, as DPH awaits the next, much larger allotment.

Update: DPH confirmed Wednesday that all the doses had been assigned for the day, and the SF General walk-in clinic will now be closed on Thursday pending the next shipment.

Just four weeks ago, vaccines were in short supply in San Francisco, New York, and elsewhere, just as the LGBTQ communities in both those cities were finishing their Pride celebrations. Experts warned that we were likely to see outbreak trajectories here similar to what had already occurred in Europe a month earlier, and that has come to pass.

In early July, there were just 40 monkeypox cases in San Francisco, up from 16 a week prior. As of July 31, there were 310 confirmed and probable cases in the city — nearly half the 786 total cases in California. Nationwide, there are now almost 5,200 cases.

The majority of cases in San Francisco have occurred in white gay and bisexual men between the ages of 25 and 45, however the number of cases in the Latinx gay/bi community is disproportionately high — 27% of cases, while Latinx people make up only about 15% of the city’s population.

The primary mode of transmission for the virus is through close, physical contact — not always but very often sexual contact and kissing. Experts have cautioned that gay and bi men attending crowded events make an effort to keep their skin covered to avoid inadvertent contact with strangers. Some smaller percentage of cases are transmitted through close, airborne contact. There have not yet been any fatalities from monkeypox in this outbreak, however cases can last for weeks and cause patients extraordinary pain, as well as require extended isolation.

Technically, all those who have received first doses of the vaccine need to return in four weeks for a second dose. But the city is not scheduling those and is prioritizing getting first jabs in arms first.

Mayor London Breed declared monkeypox a city emergency late last week, and Newsom followed with a state declaration on Monday. The state declaration does not necessarily get us any more vaccine doses, but does allow for faster distribution of federal allotments.