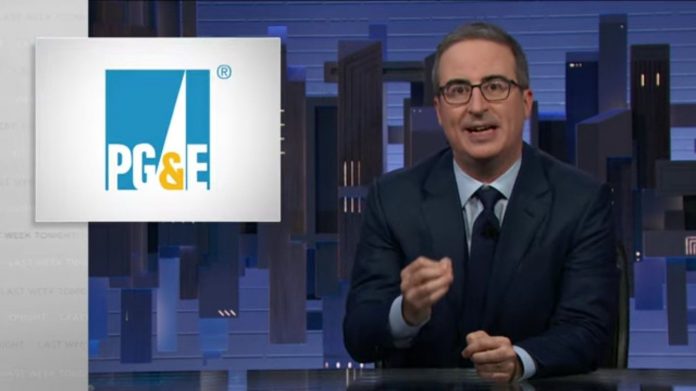 Sunday’s episode of Last Week Tonight with John Oliver featured a lengthy stemwinder shredding PG&E to bits, and for good measure, razzing Gavin Newsom for going so easy on the wildfire-plagued utility.

In a post-Jon Stewart Daily Show world, we do still at least have the viciously intelligent satirical stylings of his former stand-in John Oliver on the brilliant HBO series Last Week Tonight with John Oliver. And this week’s episode hit close to home for Californians affected by wildfires started by PG&E’s outdated equipment, and lordy, did Oliver hit PG&E hard in the spectacular, 24-minute long rant seen below.

Yes, the segment is nearly a half-hour long, and Oliver jabs at PG&E first at the 2:30 mark, and then again at the 14:40 mark. He has plenty of tragicomedy insult humor for other regional monopoly utilities like Duke Energy and FirstEnergy.

“Utilities are exceptionally prone to scandal,” Oliver declares. “Just Google your utility company right now and the word ‘scandal’, and chances are they’ve gotten into some major trouble. It’s like Googling your local Jimmy John’s and ‘e coli,’ or your favorite high school teacher and the words ‘January 6.’ You’re not going to like the results you find.”

The early bit he does on PG&E addresses their role in the Camp Fire, and it is hardly a laughing matter, considering the 84 counts of manslaughter involved, and how the fire was traced to a rusted transmission part that was 97 years old.

“We’ve talked before about the 2018 Camp Fire, the deadliest wildfire in California history, and how it all started when this hook holding up a PG&E transmission line broke causing the line to ignite the brush below, eventually decimating several nearby communities, and leaving 85 people dead,” Oliver explains. “PG&E had since paid fines and settlements. But it’s still very much in operation, despite the fact that this wasn’t close to the only scandal they’ve been involved in.”

“PG&E is not only not in prison, it is still supplying power to millions of Californians who have no choice in the matter,” he continues. “And if you’re thinking ‘How the fuck is that possible?,’ that is what this story is about. It’s about the incredible amount of power that we give to utilities.”

And he doesn’t even get into the Erin Brockovich cancer stuff!

Oliver’s segment meanders, as he often does, to side jokes involving things like sausage races at baseball games, and a viral video of two ducks eating peas. But at the At the 14:40 mark, he brings it back to PG&E’s monopoly power.

“Let’s go back to PG&E, arguably California’s most hated company,” Oliver says. “For the record, fuck everyone in their C-suite with a cactus.

“You  can see why Californians hate PG&E so much. In just one three-year timespan it was responsible for about 1,500 fires. That’s an average of more than one fire a day. At that point, PG&E are less of a utility, and more of a fire company that occasionally delivers power to people’s homes.”

Gavin Newsom gets it good too, for his laxness with the utility. Oliver shows a clip of a reporter confronting Newsom on the campaign contributions he’s taken from the company.

“PG&E was convicted of six federal felonies in 2016, after that, you took more than $200,000 from them to help get elected,” the reporter says. “How should people trust you to be running the show to come up with a solution?”

Gavin gives a haughty eye roll and responds, “I wish you luck with whatever you’re working on but that’s a strange question.”

Oliver explodes: “Is it? Is it, though? Because that seemed pretty reasonable to me. It’s not like that reporter asked, ‘Mr. Governor, why do you think The Wiggles had Princess Diana Killed?’ That is a strange question.”

“But what he just asked you deserved a proper answer and yet frustratingly, if you live in California and PG&E is your provider, there is nothing you can do,” Oliver points out. “Every time you turn your lights on, you are reminded that your utility has killed people, and the only real recourse you have is giving them a shitty Yelp review.”

Oliver throws some truth to power at the end, in a way too few news programs do.

“It’s not like PG&E didn’t have the money to perform basic maintenance,” he notes. “Because in the five years before the Camp Fire, it issued more than $5 billion in dividends to shareholders. Look, clearly, this isn’t a system where you the customer are going to be prioritized. If anything, the model only makes sense if the company’s shareholders are viewed as the customer, and your bills are the product.”

As a spoiler, we will note that the segment ends with John Oliver being murdered in front of a live studio audience, with an (obviously fake) memorial video playing for him. But this episode is still in rotation on HBO, and he’ll be back with a new one this Sunday.

Related: Activists Furious at Newsom for Granting PG&E a Safety Certification, Given All the Manslaughter Charges and Whatnot [SFist]