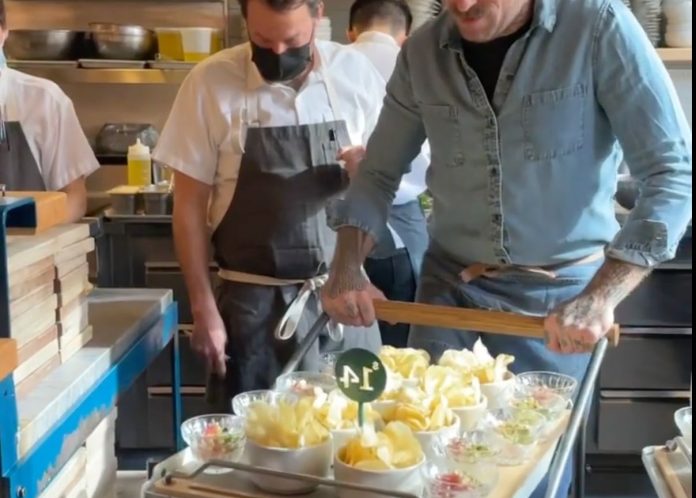 The dim sum-style service with trays and carts is back at State Bird Provisions, and all is right with the world.

SFist missed this restaurant-news tidbit when it happened a couple weeks back, but a video posted to Instagram this week alerted us to the fact that the carts are rolling again at State Bird Provisions. The well loved, much acclaimed, still-not-that-easy-to-get-into Fillmore District restaurant just turned 10 years old in December, and it’s weathered the pandemic with a swanky parklet and with a fully a la carte, normal ordering situation off a menu.

Early in the pandemic, obviously, people were anxious about buffets or the idea of food passed on trays, and chef-owner Stuart Brioza made the decision to just make the whole experience menu-based for a while, once they reopened for outdoor dining. (The restaurant always had a brief menu of “commandables,” but much of the experience was ordering dishes that came around on carts or trays, each with a pricetag, just like in a dim sum place.)

“Returning to dim sum-style service is a return to our identity,” Brioza said to SFGate, noting that in two years’ time there’s been some turnover in terms of staff, so this is new for many of them. “At this point, most of our team has yet to experience the buzz and energy of State Bird Provisions with the carts and trays in service. So it’s new, just like outdoor dining was a couple of years ago.”

Also, in addition to bringing the carts and trays back, the restaurant opened up the outdoor parklet area to large-party reservations for the first time — now that they’re back to full capacity indoors and things are running smoothly. It’s an $85-per-person set menu for groups of six or more, and you’re likely just to find two seatings times (like around 6 and 8:30 p.m.).

The food at State Bird Provisions, based on a visit from a couple months ago, is super fun and better than ever under chef de cuisine Gaby Maeda — who also landed on Food & Wine’s coveted Best New Chefs list last year. In addition to the signature menu item, the CA State Bird with Provisions — fried quail with lemon-onion compote — there is a monthly-changing “cover bird” on offer that is a different, always interesting quail preparation — for May it’s “Hydrabadi biryani” style with cucumber and raita.

This was the one from February: