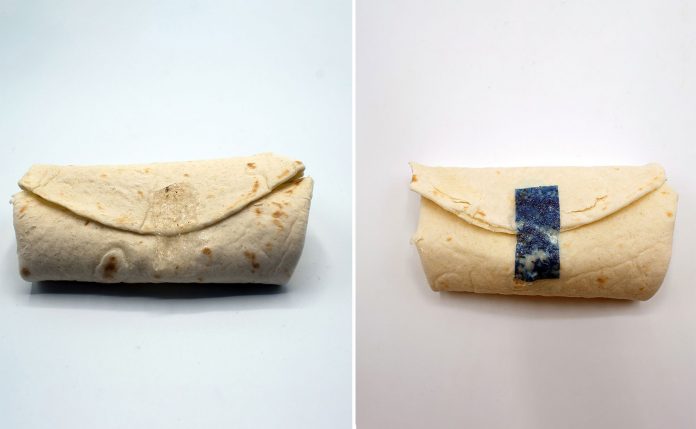 Do you live someplace outside of California and your local taqueria (or whatever they call those there) is the world’s worst when it comes to properly folding and rolling a burrito?

Fans of Mission-style burritos in San Francisco — and really fans of any self-respecting taqueria in most of urban California — know that a properly, tightly rolled burrito does not come apart. You carefully peel the foil down the sides as you eat, and while things may leak depending on the juiciness of the filling, that thing doesn’t need any gadgetry to keep it from falling open — though the final few bites might require extra napkins and/or a fork.

But some recent graduates of Johns Hopkins University in Baltimore — not exactly a hotbed of burrito-craft — have nonetheless come up with a solution to a problem we do not have out west. It’s called Tastee Tape, and it’s an engineered, edible product for use in taping shut poorly made burritos and wraps.

In the photos below, the transparent Tastee Tape is the real stuff, on the left, while it’s dyed blue on the right just for demonstration purposes.

The tape is flavorless, gluten-free, and vegan.

As Food & Wine first reported, Tastee Tape came out of the Whiting School of Engineering’s annual Design Day earlier this month. An all-female team of engineers — Tyler Guarino, Marie Eric, Rachel Nie, and Erin Walsh — describe the invention as “an edible adhesive comprising a food-grade fibrous scaffold and an organic adhesive that ensures the ingredients in your favorite wrap are kept tucked tightly inside during cooking and consumption.”

The genesis of the invention idea, Guarino tells CNN, came from real life eating troubles. “Erin was eating a burrito and the tortilla opened all over her,” Guarino says.

The team isn’t disclosing the formula they used for the edible adhesive strips, because they’re currently applying for a patent.

But they’re getting plenty of press considering this isn’t even on the market yet!

“First, we learned about the science around tape and different adhesives, and then we worked to find edible counterparts,” Guarino told Food & Wine. “Tastee Tape allows you to put full faith in your tortilla, and enjoy your meal, mess-free.”

Again, if your burrito was wrapped neatly and correctly… Anyway, there’s no hope for a lot of burrito places around the nation, so this is probably a useful invention for them.