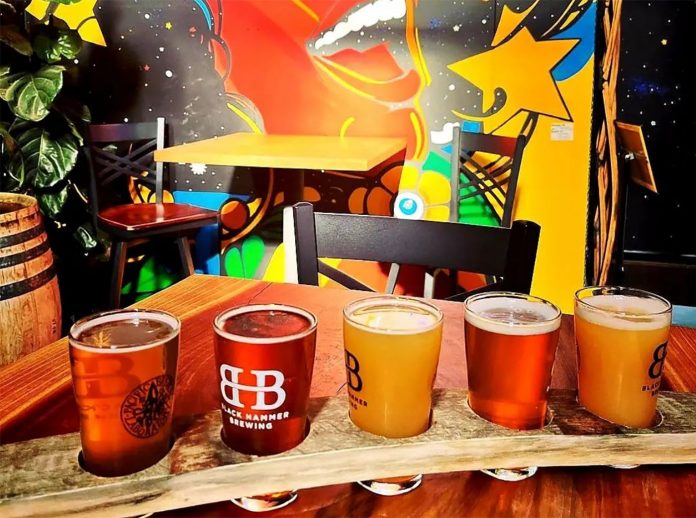 The 13 Best Breweries In San Francisco and the East Bay

Ever since Fritz Maytag bought Anchor Brewing Company in 1965 and spun it into one of the pioneering craft breweries in late-20th Century America, the SF Bay Area has played an outsized role in the country’s beer scene.

Now as we properly enter the 2020s with a plague hopefully becoming just an endemic nuisance, San Francisco is coming off of two decades of a craft-beer boom that hit a true fever pitch around 2013. Our local breweries, both in the city and scattered across the Bay Area, are now trying to mature and coalesce into stable, profitable versions of themselves, and while there’s plenty of competition out there, there are also plenty of people who love good beer.

Some shakeouts are still happening, and one popular brewery that expanded here from San Diego, Modern Times, recently shuttered their two-year-old Oakland taproom amid some financial strife.

Below we bring you the best of what we think SF, Oakland, and Berkeley have to offer, beer-wise. (This list could have easily been twice as long if we included the North and South Bay and Santa Cruz, and in some beer geeks’ opinions, Russian River Brewing is still king.)

Ale Industries
If all you’ve tasted from this environmentally conscious Oakland craft brewhouse is their East Bay IPA or their kolsch-style Town Beer, then you haven’t sampled nearly enough of what brewmaster Morgan Cox and his team are capable of. The brewing operation dates back 2009, when Cox began brewing out of a location in Concord, and eventually they moved to their current Fruitvale digs in 2014 — but this still qualifies them as one of the oldest operating breweries in Oakland. The menu typically includes lighter beers like the unfiltered, citrus-y Golden State of Mind; as well as terrific IPAs (hazy and non); a full complement of fruity sours; and unique offerings like tea-bittered gruits, and Cherry Kush, an unfiltered citrus beer flavored with cherry juice.
3096 E. 10th Street, Oakland

Almanac Beer Co.
This acclaimed brewing operation has moved around a bit in the last decade, but they’ve now settled into their digs in an old warehouse on the former Naval Air Base in Alameda — near the monthly flea market, and the St. George distillery. Almanac originally made its name with unique sour beers, but they’re now just as well known for other things like their delicious and varied IPAs,  and the lemony Golden Gate Gose (not currently available). The taproom menu, with crowlers and growlers available to go, is always full of interesting stuff, and on weekends they serve excellent Micheladas.
651B Tower Avenue, Alameda

Anchor Brewing
The grandaddy of this list, Anchor Brewing has gone through a few incarnations even after Fritz Maytag took over in the 1960s — following Gottlieb Brekle’s founding of the brewery way back in 1871. The historic building on Potrero Hill is worth visiting for a $20 tour, but if you just want to try some beer, Anchor’s Public Taps will take care of you Wednesday to Sunday. There’s usually a food truck on hand, and you can try a bunch of beers you probably haven’t tasted before, including newer offerings like the West Coast IPA and Easy Weekend IPA, as well as weekly releases from Assistant Brewmaster Dane Volek.
1705 Mariposa Street, San Francisco

Barebottle Brewing Co.
One of the nexuses (nexi?) of IPA experimentation in San Francisco proper is this scrappy brewery — which also has a taproom in Santa Clara. The SF space is a wide-open warehouse, production facility, and brewpub out at the edge of Bernal Heights near the 101 overpass, complete with big communal tables, pinball, and video games, and room for a food truck to pull in out front. Barebottle has a lengthy tap list on any given day that would be a challenge for most people sample completely through. But on the plus side, all that selection means you can taste an array of interesting stuff, like a flight of just hazy IPAs in different variations, a flight of sours, and/or a flight of West Coast-style IPAs. They’ve also got a few other things usually like a saison, a pilsner, and currently a rustic, unfiltered lager they call Haus Mates.
1525 Cortland Avenue, San Francisco

Black Hammer Brewing/Wilkommen
It was born out of a Burning Man beer-making operation — for years Black Hammer has been known as “the Burning Man brewery,” with the party-filled camp of head brewer Jim Furman (whose Burner name is Hammer) always serving up good beer. And in 2019, Black Hammer also solidified its ties to the LGBTQ community by opening the first brewpub/beer garden in the Castro — more of an indoor “garden,” but with a German beer-garden feel, called Wilkommen, complete with bratwurst from Rosamunde. The beer is always good, with German styles like helles and kolsch, along with IPAs, center stage. (Furman is also gluten sensitive, and produces several gluten-removed beers.) And notably, last year, Black Hammer took home the gold medal at the California Craft Brewers Cup for one of their Black Claw hard seltzers, the Meyer Lemon Rosemary.
SoMa brewery: 544 Bryant Street between 3rd and 4th
Wilkommen: 2196 Market Street at Sanchez

Cellarmaker
It’s been nearly a decade since Cellarmaker made its quiet debut in SoMa, with a taproom serving unusual, noteworthy beers like their Coffee & Cigarettes porter, and Taco Hands, a beer that tasted like tacos. Co-founder Connor Casey and co-founder/head brewer Tim Sciascia have since settled into a groove highlighting a range of IPAs, lagers, pale ales, sours, experimental beer-wine hybrids, and more. The taproom survived the pandemic, and meanwhile Cellarmaker House of Pizza in the Mission/La Lengua made a 2019 debut with some excellent square pies, and became a major pandemic hit. Now the crew is expanding again, relocating their Oakland flagship to the former Blue Bottle digs near Jack London Square, with a new brewpub that will also serve pizza, set to open later this year.
1150 Howard Street and 3193 Mission Street in San Francisco
300 Webster Street, Oakland, opening soon

Fieldwork
Another brewery that feels like it’s been around forever but was actually founded less than a decade back, in 2014, Fieldwork is a Bay Area enterprise through and through with a flagship operation on Sixth Street in Berkeley. In eight years they’ve grown to seven total locations, including outposts in Corte Madera, Napa, San Mateo, and Sacramento. And while they make over a dozen excellent IPAs in both West Coast and hazy styles, Fieldwork’s tap list runs the gamut of sours, lighter offerings, Belgian and German varieties (these are some of the standouts), and dark stouts — and they’re also making wine on tap. Tasters start at $3, and full pints are $8, and some locations offer sandwiches and snacks.
1160 Sixth Street, Berkeley, and six other locations

Fort Point Beer Co.
Named for the national historic site at the base of the Golden Gate Bridge, Fort Point Beer Co. has grown into a powerhouse local brewing operation, with their cleverly branded can array now ubiquitous in Bay Area grocery stores. Brothers Tyler and Justin Catalana began as home brewers over a decade ago, founding Mill Valley Beerworks in 2009 in their Marin County hometown. They expanded to San Francisco in 2014, founding Fort Point out of a brewery space next to Crissy Field, with former Mill Valley Beerworks bartender Mike Schnebeck as head brewer. Within a couple of years, the brand was well established around the city and the region, opening a Ferry Building taproom in 2015 and beginning to can their own beer with their simple, solid-color, graphic branding. They’ve since expanded with Fort Point Lower Haight (at Pierce), Fort Point Valencia in the Mission, and the soon-to-open Fort Point Rockridge. And yes, the beer is consistent and good — if not always as experimental and boundary-pushing as others on this list — with their kolsch and Animal (IPA) being standouts.
742 Valencia Street and four other locations.

Ghost Town Brewing
Homebrewing was just a side-hustle for four members of an Oakland metal band, Ryan Nosek, Sam Carr-Prindle, Jason Gehman and Adam Hill, and they rented a rehearsal space in 2012 that doubled as a single-barrel brewery. As they told Berkeleyside, beer quickly became the main focus, with multiple local accounts to fill — they never even settled on a name for the band — and by 2018 the scrappy quartet had opened their full-scale brewery and taproom in West Oakland. In 2021, Ghost Town was the beneficiary of a fully built-out restaurant and beer garden space in Oakland’s Laurel District, which was abandoned in the early pandemic by SF-based 4505 Burgers & BBQ, and that has since opened as Ghost Town’s brewpub, with a full food menu and 32 taps. On those taps you’ll find a range of styles, including pilsners, a cream ale, malt-forward offerings, sours, and a bunch of IPAs — many of which can be taken home in 10-oz. crowlers or $20-$30 growlers.
1960 Adeline Street and 3506 MacArthur Blvd., Oakland

The Rare Barrel
The only Bay Area brewery devoted primarily to sour beer, The Rare Barrel made its debut in Berkeley’s industrial district in late 2013. The operation has since matured alongside the local beer scene and added an array of collaboration beers, their non-sour side brand Hello Friend, hard kombuchas, and more to the menu. Co-founder Jay Goodwin got his start at Orange County’s acclaimed sour beer house The Bruery, and The Rare Barrel is his creation with his dad, Brad Goodwin, and friend Alex Wallash. Some standouts on the taps are Rare Barrel’s latest version of Cosmic Dust — a golden sour aged in oak barrels with hibiscus — and Map of the Sun — a golden sour aged with apricots.
940 Parker Street, Berkeley

Seven Stills
Seven Stills is unique among SF breweries in its tandem brewing and distilling operation — though arguably Anchor did this first, with Anchor Distilling now spun off as Hotaling & Co. From their Design District headquarters, Seven Stills makes whiskey and other spirits using beer byproducts, in addition to beer offerings like a kolsch, an IPA, and an apricot-wheat beer. The place offers tours if you’re interested in distilling and the ways the brewing process overlaps here. And these days they also have a taproom in the Sunset, complete with tacos.
100 Hooper Street and 3645 Lawton Street, San Francisco

Temescal Brewing
Founded in Oakland’s Temescal District in 2016, Temescal Brewing has an airy beer garden and a decidedly laid-back, inclusive Oakland vibe — with “No Jerks” being a tagline, and the name of their lager. It’s the only brewery on this list that makes really conscious, tangible gestures toward diversity, with Queer First Fridays events, and Hella Halftones, an event they launched in 2019 to address craft beer’s diversity problem and to invite members of the Black community to a panel discussion about it. The beer here, too, is no joke, with great lighter offerings like a gose, a Belgian wheat beer, and the aforementioned No Jerks Lager. There are also, of course, several IPAs, and some funky wild beers in large-format bottles to try.
4115 Telegraph Avenue, Oakland

Woods Beer & Wine Co.
Having grown out of a decade-old business that focused solely on yerba mate-infused beer, Woods has grown into a major player in the local scene with four outposts across SF, one on Treasure Island, and another on the way in Marin. They’ve also expanded their production to include wine, beer-wine hybrids, and an array of intriguing, innovative beers to suit most palates. Standouts include their hibiscus-infused Morpho ale, their tropical-fruit-inflected Crusoe IPA, and the Divine Origins Albarino Blonde Ale.
3801 18th Street, SF, and multiple other locations