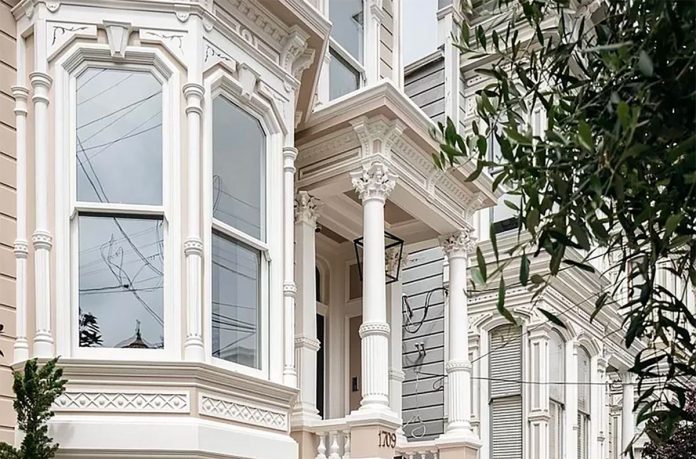 A clearly laughable listing went live on Zillow sometime yesterday or today, showing the famed Full House house on Broderick Street for sale for $37 million — a cool $32 million over what it sold for in 2020. But the funniest part is that somebody at ABC 7 mistook this as legit.

We at SFist had to do a double-take when a story went live on ABC 7’s website Wednesday morning declaring that the Full House house was being listed for $37 million. The story, now corrected, went on to casually mention that the house at 1709 Broderick Street last sold for “just over $5 million” in “November” — it actually sold in October 2020 for $5.35 million. Most people, even if they’re not journalists typically covering the real estate beat, might have looked at those numbers and thought some follow-up research was in order. Even if it is just an asking price, that would assume the four-bedroom home had appreciated 692%, and that four-bedroom Victorians in SF were now going for the price of Sea Cliff and Presidio Heights mansions.

Best Realtors in the East Bay

Best Realtors in the South Bay

UPDATE: This "Full House" listing is no longer listed on Zillow. https://t.co/w1EAU1agoo

We checked the Zillow listing and did not see any sort of price near $37 million — though the current Zestimate has the house worth $6.5 million less than two years after selling for $5.35 million, so yeah, it pays to be rich in this housing market.

Fast-forward a couple hours, and ABC 7 has issued a correction. “It looks like the San Francisco home featured on the classic sitcom ‘Full House’ is not on the market for $37 million after all,” says the non-bylined post.

Zillow, for their part, is contrite about allowing the apparently fraudulent listing to go live.

“Our teams use a number of different tools to prevent inappropriate content from publishing in the first place, but if a listing is found to be fraudulent after it’s posted, our team takes steps to remove it,” a Zillow spokesperson said in a statement. “In this case, we discovered a ‘For Sale By Owner’ listing was illegitimate after it was posted, and have since taken it down. We apologize for any confusion this may have caused.”

The house previously sold in the fall of 2020, after Full House creator Jeff Franklin bought it for himself in 2016, under asking, for $4 million. After giving it an extensive remodel, Franklin listed it for $6 million three years later, but it was de-listed and price-reduced a couple of times before selling for $5.35 million. Now some new owners are having the pleasure of tourists stopping for photos on the reg, and in January their stoop became an ersatz memorial for Bob Saget, RIP.

It’s not to say that crazy things and crazier prices don’t happen in the SF real estate world. But rest assured, wealthy folks in the market for an SF single-family home: You can still buy one, even with 1990s sitcom cachet, for well under $10 million.