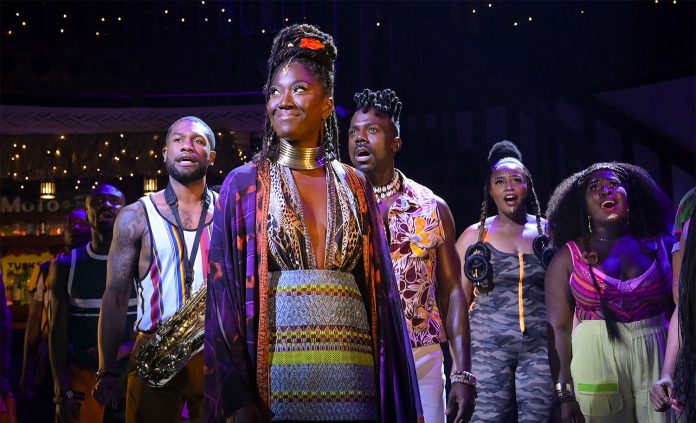 Berkeley Rep likely has another hit on its hands with a world-premiere musical that it has helped nurture since the pre-pandemic times, and Goddess seems assured to be another Broadway-bound show the theater can take credit for launching on its way.

Set in present-day Mombasa, Kenya, Goddess is the conception of Kenyan immigrant and New York stage director Saheem Ali and Ghanian American playwright Jocelyn Bioh, with whom Ali previously collaborated on Merry Wives — the acclaimed, all Black, 2021 Shakespeare in the Park adaptation of The Merry Wives of Windsor. The pair worked at the Public Theater on that Shakespeare adaptation centered on a community of West African immigrants in South Harlem, and here, they move to East Africa, the historic city of Mombasa, and the mythology its inhabitants still embrace alongside more modern Christian and Muslim traditions.

The musical opens in a burst of joyous fun in a fictional nightclub called Moto Moto, where a beguiling and talented singer has recently become the main audience draw. Her name is Nadira (Amber Iman), and we learn from the opening notes sung by the spirit-like Grio Trio chorus that she is not exactly human. Nadira is in fact the famed African goddess of music Marimba come to earth — and while it’s confusing at times whether or not she knows this about herself, the central arc of the show is about whether she and a mortal man can fall in love.

That man is Omari (Philip Johnson Richardson), a bright young air to a political dynasty in Mombasa, whose parents and fiancee have been grooming him for many years to run for mayor of the city and perhaps, eventually, president of Kenya. He has just returned from school abroad, in New York City, ready to start campaigning. But as soon as he returns to his favorite haunt to play the saxophone one night, he shares a few bars with the ethereal Nadira, and his life seems like it may change course.

As Omari’s parents Siti and Hassan, stage and screen vets Kecia Lewis and Kingsley Leggs are delightfully doting and demanding. And Lewis gets to shine with a solo number in the second act that, like many solos in the show, is a sung-to-the-rafters soul-stirrer.

Richardson and Iman are both terrific in their roles as well, with Iman’s Nadira impressively convincing as a goddess-on-earth with the voice to match. The supporting cast and ensemble are also incredibly strong, with standouts being the indefatigable and magnetic Rodrick Covington as the emcee/narrator and barback Ahmed, and Abena, as bar manager — and Ahmed’s unrequited love interest — Rashida.

The set design by Arnulfo Moldanado is masterful in its malleability, and in locating us firmly in a modern-day Afro jazz nightclub. And the music and lyrics by Michael Thurber, who also wrote music for Merry Wives, is artful, at times haunting, but perhaps at its best evoking a celebration of African rhythms and vocal intonations. The opening and closing “Mombasa” number is a bouncing, infectious bop, and Nadira’s song “Honey Sweet” is a sexy, radio-ready seduction song.

When I say the show already looks ready for Broadway, it should go without saying that this is a talented, polished cast at the top of their game, performing songs that might as well already be on a cast recording. In its current state, this powerhouse troupe is telling a story that feels compelling and mostly whole, with mostly fleshed-out characters, and a climax and denouement that feel appropriately big and surprising.

There may still be some elements to resolve or explain for the audience’s sake, and a few characters like bar owner Madongo (Lawrence Stallings) and Omari’s fiancee Cheche (Destinee Rea) who feel sort of one-note and two-dimensional — plot drivers more than people.

With the mythology stuff, there’s maybe a bit more hand-holding that could happen about how gods and spirits operate in the minds of these characters. In some dramaturgy about Mombasa itself, Karishma Bhagani writes, “It is not uncommon to hear anecdotes of the presence of jinns and heavenly spirits in one’s quotidian interactions [in Kenya]. Thus, the day-to-day activities in the human, material world are heavily influenced by the lateral relationship with the spirit and ancestral world.” Thus, Bhagani says, it feels right to have to have the witchy Grio Trio serve as “all-seeing narrators of the musical [who] can be likened to how jinns are perceived in Mombasa as all-knowing spirits that cohabit with humans and are privy to the trajectory of our present lives.”

But Goddess thrusts us emphatically into the heart of musical Mombasa, and spins a story that’s rich, funny, and surreal enough that most audiences will surely clamor back for more — and jump to their feet for the curtain call, like they did last night. I have no doubt that the kinks will work themselves out before this thing is up for Tony nominations.