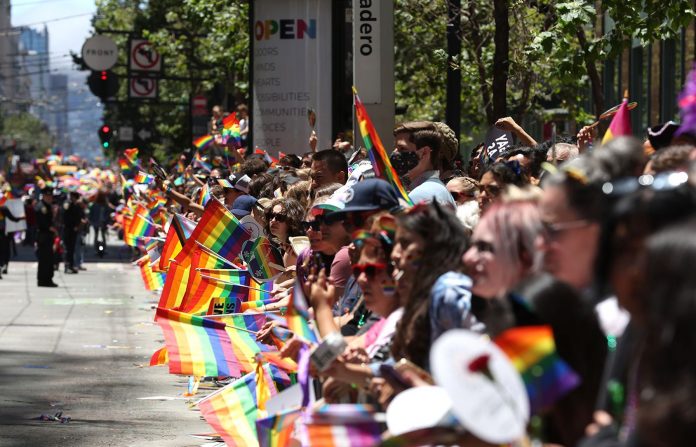 The full scale SF Pride Parade and Civic Center celebration went off mostly without incident on Sunday for the first time in three years. But the mood was slightly marred by some end-of-day (probably drunken) chaos.

As has happened in earlier years around the time the fog rolls in, when the crowd at the Civic Center LGBTQ Pride festival is typically pretty inebriated and starting to disperse, there were some tensions Sunday evening just about a half hour before the scheduled end to the event. Around 5:25 p.m., according to police and a citywide alert that went out by text, a large fight broke out between groups of individuals in the vicinity of Polk and Hayes streets, at the edge of the Civic Center celebration. According to the Chronicle, this was where some porta-potties were set up, and police were called over to a “loud” ruckus occurring.

The video below shows some of that chaos.

To the man twerking while everyone punches eachother, happy pride #sfpride pic.twitter.com/k4xlXdxWaQ

Moments later, at 5:30 p.m., in the area of the main stage by City Hall, Winters said that “an unknown female dispersed a caustic chemical, possibly ‘bear spray’ into the crowd.”

Out of caution, SF Pride pulled the plug on all the stages around 5:35, 20 minutes before the event was supposed to end.

Drag performer Peaches Christ, who had just left the stage at the time, was herself confused about what was going on. “What is happening at the Civic Center in SF right now?” she wrote on Facebook. “I was just onstage there and left but now we are getting text messages that chaos has erupted and people are asking if I’m ok. This is scary.”

There was reportedly more to the chaos in that final half-hour of the Civic Center festivities. Officer Winters said there were “a whole bunch of fights between 5:30 and 6 p.m.,” but nothing as large as whatever happened at Polk and Hayes.

Add to that an apparently false report of a shooting at Seventh and Market just after 5:30 p.m., during which time area businesses reportedly locked their doors so that people wouldn’t run out into the street. Police later said “Officers weren’t able to locate any victims/witnesses,” and there “doesn’t appear to be merit” to the shooting report.

SF Pride put out a statement after the bear spray (or whatever it was) incident, saying it was “a person spraying mace into the crowd. Although no one was harmed, we know it was not a pleasant experience. We decided to cut the performance short in the interest of safety.”

The last full-scale Pride celebration in 2019 went off mostly without incident, however there were four arrests for people bringing guns to the Civic Center festivities, including one 22-year-old East Bay man who was recognized by police from prior contacts was carrying a semi-automatic pistol.

There were also shooting incidents at Pride in 2013, 2014, and 2015, all of them occurring at the end of the day on Sunday, in or around the Civic Center festival grounds. None of those shootings were fatal, but all resulted in injuries.

SF Pride was sued by a Los Angeles man whose leg was shattered in the 2013 shooting, and the case was settled in 2015 just before going to trial.

Update: Honey Mahogany, who was MCing the main stage when the festival was cut short, writes this on Facebook:

Thank you to the San Francisco Pride team for helping keep everyone safe. I’m a little sad that this is the way we ended the day yesterday. To cut off Martha Wash in the middle of her set, and have to cut the closing act was heartbreaking, but making sure everyone was safe was our priority.

I became concerned for all of our safety. As soon as we pointed out what was happening to the crew of the main stage, they got on the line with security and were able to confirm it was not a shooting but that someone had sprayed mace into the crowd, but there were persisting rumors of a shooting. In the interest of safety, [Sister] Roma and I interrupted Ms. Wash’s performance and asked everyone to remain calm and let them know that there was an incident involving mace that was causing the panic, to not push or shove one another, to look out for one another, and to peacefully and calmly disperse to attend post-Pride festivities in the interest of caution and safety. I’ll be forever grateful to the quick response of our first responders and the quick action of our SF Pride main stage crew.

Top image: Parade goers hold Pride flags as they line the route of the 52nd Annual San Francisco Pride Parade and Celebration on June 26, 2022 in San Francisco, California. Thousands of people came out to the annual SF Pride Parade after a two year hiatus due to the COVID-19 pandemic. (Photo by Justin Sullivan/Getty Image