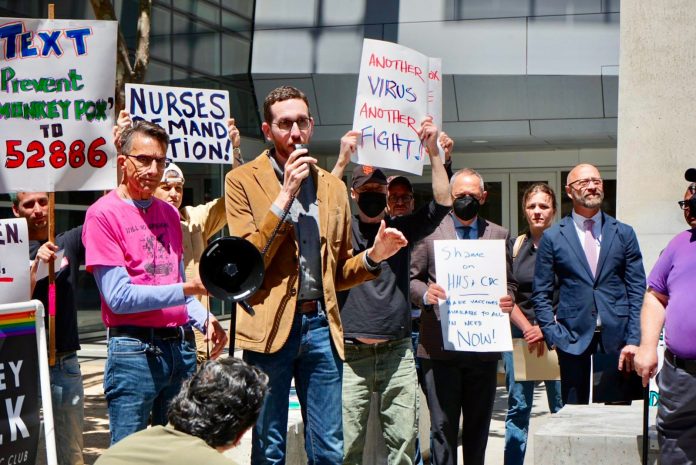 Local leaders and members of several LGTBQ organizations gathered outside the Federal Building in SoMa on Monday to call on the U.S. Department of Health and Human Services to send more monkeypox vaccine to San Francisco.

After two weeks in which San Francisco’s confirmed cases of monkeypox have increased fivefold, and while demand for the Jynneos vaccine to treat and/or prevent monkeypox infection is sky-high, LGBTQ leaders and nonprofits in the city are demanding the federal government pay more attention where outbreaks are occurring.

The SF Department of Public Health sent a letter to the CDC last week requesting 35,000 doses of the vaccine, but the feds have said the city’s next shipment would likely contain less than 4,200 doses. CDC Director Dr. Rochelle Walensky said in a call with reporters on Friday that the U.S. was expecting 131,000 total doses from the Denmark manufacturer of Jynneos in the coming weeks, but local officials say that is not enough unless SF gets a huge share.

“Almost 90% of the infections in the Bay Area are in San Francisco, and about half of the statewide infections are here in San Francisco,” said state Senator Scott Wiener at Monday’s rally, per NBC Bay Area. ““In order to vaccinate our highest risk communities, we need about 35,000 doses, and so far we’ve received about 7,000.”

Today we rallied at the Federal Building demanding more monkeypox vaccines & a stronger response to the outbreak. We have limited time to control this outbreak. We need action & we need it now. pic.twitter.com/ZAbYdHcgMk

Cases of monkeypox have primarily been occurring among gay and bisexual men and trans women who have sex with men, and outbreaks have been happening in cities with large LGBTQ populations like Berlin, London, New York, and here in SF. Some of the first cases in Germany this spring were linked to circuit parties that happened in Berlin and on the Spanish island of Gran Canaria.

Subsequently, following San Francisco’s Pride Weekend celebrations, two parties attended largely by gay men sent out notices to attendees that people with confirmed or suspected monkeypox cases had been in attendance — which spurred many to clamor for the vaccine. SF’s case count rose from 16 in late June to 86 as of this week.

The disease is primarily spread through close, skin-to-skin contact. While not typically deadly, infections can be severe, especially when sores occur in the eyes or anus. Gary McCoy, co-chair of the Alice B. Toklas LGBTQ Democratic Club, ssays that he knows someone who is at risk of losing his eye due to a monkeypox infection.

“The infection rate is increasing rapidly … we don’t have enough vaccines to vaccinate people. We have a very short window of time in which to prevent this from becoming endemic in the United States,” said Paul Aguilar, chair of the Harvey Milk Club HIV Caucus, per the Chronicle. “The street fair season is coming up. That’s parties, raves, people rubbing up against each other. It’s ripe for it to be spread,” Aguilar said, referring to the Up Your Alley and Folsom Street fairs, the former which is happening in two weeks.

Wiener blasted the federal government for ignoring the potential threat of a monkeypox outbreak in the U.S., after the Jynneos vaccine was developed three years ago — and after the virus had been circulating, primarily, in Africa, for two decades.

“A vaccine was developed in 2019 and instead of ordering a massive amount of vaccines, it was ignored,” Wiener said at Monday’s event, per the Chronicle.

It was not clear what day this week the SF Department of Public Health would be receiving the next round of 4,163 doses, and the vaccination clinic at SF General remains temporary closed. When the doses arrive, they will also be distributed to Kaiser, SF City Clinic, and Strut (470 Castro Street). Find more info here, and follow SFDPH on Twitter for updates.