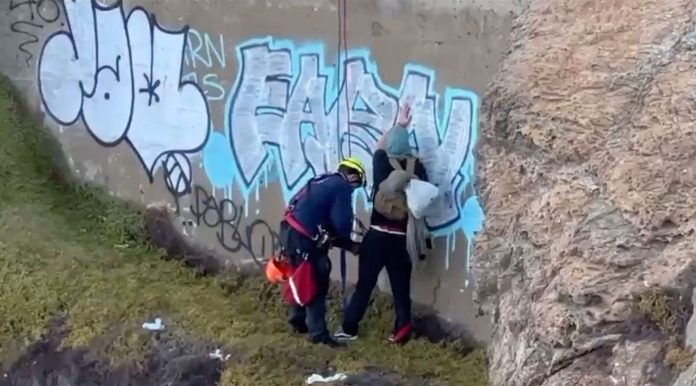 A man who may or may not have been up to no good required a rescue from the Fire Department early Monday morning after apparently going over the wall beside the Cliff House.

The rescue happened around 7 a.m. Monday, after the fire department received a report of a man stuck on an outcropping below the Cliff House after apparently climbing down there. The call for rescue came in around 6:40 a.m., as the Chronicle reports, after passersby reportedly heard the man calling for help.

Department spokesperson Lt. Jonathan Baxter said the man “went down the rocks, which you are not supposed to do, but humans are curious,” and “[He] put himself into a predicament in need of being rescuing.”

The wall that the man had presumably scrabbled down the rocks to access is a highly visible tagging spot, but there’s no word on whether that backpack he had was filled with spray paint cans.

As KPIX reported, the man was unharmed, and the incident was closed as of 8 a.m.

The former Cliff House, meanwhile, remains quiet while the National Park Service sorts through applications from potential operators with whom to sign a long-term lease. The Cliff House shuttered in 2020 amid much bellyaching by the elderly couple and their family who had run the restaurant for 47 years, after it appeared the feds were declining to sign a new lease with them. As a final gesture, the operating family, the Hountalases, said that the restaurant would never be called the Cliff House again, because they were taking the rights to the name with them.

The Park Service said earlier this year that it had put out a request for proposals, and that a new operator should be in place by the end of this year. We should have an update on the restaurateur or restaurant group selected by this summer — and a first order of business will be cleaning the graffiti off that wall.