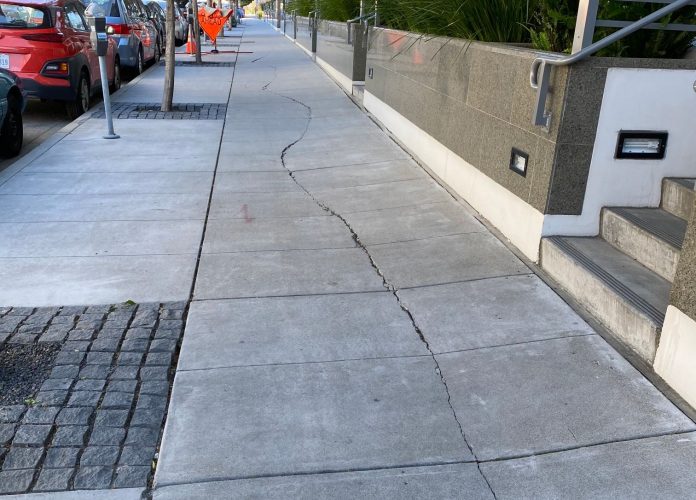 A problem that’s been visible — and trip-able — for Mission Bay residents for years, the uneven sinking of sidewalks and streets around the relatively new buildings in the neighborhood, is heading to court.

Residents and business owners in Mission Bay have been trying to draw attention to the cause for a while now, including with a KPIX piece last fall that discussed the quandary for the Department of Public Works, which only maintains certain public sidewalks in the city, while most others are the responsibility of adjacent property owners.

But now there’s a class-action suit seeking damages from the City of San Francisco, claiming that the city previously agreed to maintain the infrastructure in the Mission Bay neighborhood, in a public-private partnership agreement with a master developer over two decades ago. That agreement had been with the now defunct San Francisco Redevelopment Agency, but the suit now claims the city and the successor agency, the Office of Community Investment and Infrastructure, should now bear responsibility for fixing the streets and sidewalks that need repair due to the subsistence of the soils underneath — something that was expected because all of Mission Bay sits on landfill.

The complaint also alleges that the city should have anticipated the cracking and buckling that can be seen around the neighborhood because the streets and sidewalks are all just floating on the subsiding fill, while the buildings themselves are all shored up underneath with piles going down to bedrock. Thus the buildings aren’t really sinking, but everything else is, leading in some cases to big gaps between where a doorway’s bottom begins and where the sidewalk surface is.

(Sidebar: This is sort of the opposite of what has happened around Millennium Tower in recent years, with that building sinking under its own weight because it wasn’t shored all the way to bedrock, and the surrounding sidewalks aren’t subsiding as fast.)

Dan Rottinghaus, a construction litigator at Berding & Weil LLP, is serving as lead attorney for the plaintiff in the case, and he tells Bay City News, “It’s not a uniform kind of subsidence. So, you could have a pothole effect. You know, it could be subsided just three inches under a slab and then drop off to maybe ten, 12 inches and then come back up again. So, it’s not just uniformly flattening down.”

The complaint is seeking to get the court to certify the class, which includes all property owners in Mission Bay who have paid fees and taxes to the city, and then will seek damages from the city. But Rottinghaus tells Bay City News that damages are unlikely, but the plaintiffs are primarily interested in the seeing the city fulfill “its obligation to accept, operate, and maintain the public improvements” in the area.

The problem is likely going to come down to what counts as “infrastructure,” and whether buckling sidewalks that encircle new residential buildings are actually the city’s responsibility.

As Public Works spokesperson Rachel Gordon told KPIX last fall, “We don’t want to point the finger at anyone saying you know you should have known this, but that is the situation… [and] the city is not going to be fixing sidewalks for private property.”

Gordon added, “If we fix a sidewalk in Mission Bay, are we going to get asked to fix the sidewalk in the Mission and the Richmond District and North Beach?”

Or maybe the issue is some disagreement between what Public Works policy is, generally, and what the Redevelopment Agency at one time agreed to.

As Rottinghaus tells Bay City News, “Nobody is looking for a handout. The main thing is we just want to… see if we can convince the court that this city agency needs to come back and do something.”