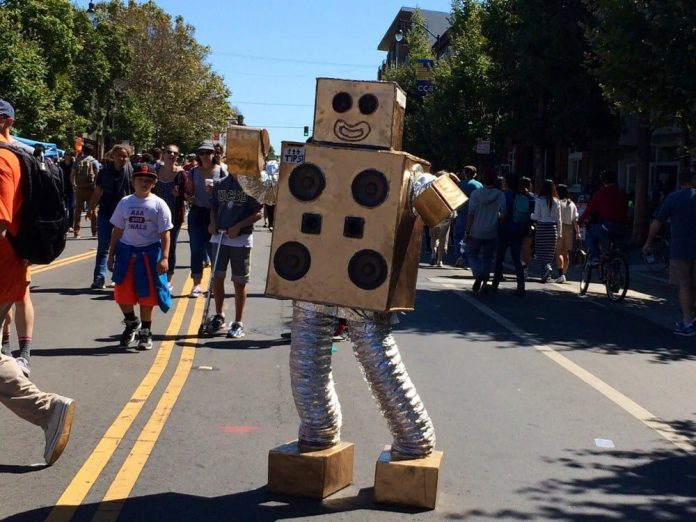 Your SF Summer and Fall Street Fair Mega-Preview, Covering Every Weekend From June to October

Your social calendar is booked up solid every single weekend for the next four months, you just may not know it yet. It is now June, and San Francisco is throwing a free public street fair or festival every weekend through mid-October. SFist has carefully sifted through the calendar, and there is a free and awesome outdoor festival somewhere in San Francisco every weekend for the next 18 weekends in a row in addition to big paid festivals and concerts like Outside Lands.

Below, we have a selection of festivals that is free of charge to attend each weekend, though obviously some will ask a “suggested donation” or attempt to hit you up for a contribution at the gate. Obviously the current COVID-19 situation renders some of these subject to change. But as it stands, here are San Francisco street fairs and festivals for the next four months in a row.

They’re rolling out the putt-putt turf on Union Street both Friday and Saturday on the first weekend in June, as the Union Street Spring Festival promises “live music, delicious food, and many wonderful vendors on Union Street from Gough to Fillmore.” (10 a.m. – 6 p.m. both days)

Surely the most somber event on this collection of free fairs, but a historic occasion that San Francisco’s largest AIDS Quilt display ever will be rolled out in Golden Gate Park’s Robin Williams Meadow and in the National AIDS Memorial Grove. More than 3,000 panels will be presented, hundreds of them never seen before, plus “the continuous reading of names of lives lost to AIDS” out loud, according to the National AIDS Memorial project. And given the logistical enormity of this project, they could sure use volunteers.  (10 a.m. – 5 p.m. both days)

SF Black Wallstreet is taking this year’s San Francisco Juneteenth to the Bayview’s Gilman Playground and Picnic Area for “a day that honors Black freedom and Black resilience and centers Black people’s unique contribution to moving this country forward.”

SF Pride returns in full for 2022, in likely the most politically contentious Pride in recent memory. But we do expect a full weekend of a Trans March on Friday, a Dyke March Saturday, and a Pride Parade on Market Street Sunday. (Full schedule here)

July 4 Fireworks at Pier 39, Plus Basically Everywhere Else in Town Too (Monday, July 4)

July 4 falls on  Monday this year, and the traditional Pier 39 fireworks will surely be buttressed by competing displays in the Mission, South of Market, and Excelsior. (9:30 p.m.)

Our previous coverage of the three-legged dog picnic made the New York Times last year (though way down at the bottom of the article), and the Tri-Pawed Picnic will return to Duboce Park in 2022 for “dogs with cones, casts, one eye, wheelchairs, blind, deaf, toothless, vintage, lumpy; they’re all welcome.” (11 a.m. – 2 p.m.)

An awesome 2022 schedule welcomes the Stern Grove Festival back after last year’s unfortunate late cancellation, and one highlight of the June 12-August 14 schedule is this late July show with LeAnn Rimes, Amythyst Kiah, and DJ LadyRyan. Tickets will be made available online on Tuesday, July 12, at 2 p.m., and they will be snapped up in under 10 minutes. (2 p.m.)

Photo from Up Your Alley 2017 by Dragomedia

The Dore Alley Fair, alternately known as Up Your Alley, is confirmed by Folsom Street Events to be taking place “on July 31,” though they have not yet specified time and location.

If you don’t have the multiple hundreds of dollars to go to Outside Lands which is also this particular weekend, the Nihonmachi Street Fair returns to Japantown. Per the organizers: “Post Street from Webster to Laguna will be closed and will showcase AAPI nonprofit organizations, Asian artisans, Sounds of Thunder Car Show (Sun), Art & Soul of Jtown, and Children’s World. Live music at the Clear Channel Outdoor Stage! Doggie World will also be back on Saturday!” (11:00 a.m. – 6:00 p.m. both days)

The official Pistahan website does not yet list 2022 times, locations or lineups for this annual celebration of Filipino food and culture. But an online call for volunteers confirms that “this year’s 29TH ANNUAL PISTAHAN PARADE AND FESTIVAL, which will take place on August 13-14, 2022.”

They’ve actually been doing an Independence Day of Ukraine Concert in San Francisco since the late 1990s, but this year’s concert in the Golden Gate Park Spreckels Temple of Music obviously takes on a historic significance like none before. (1-3 p.m.)

The two-day Autumn Moon Festival generally runs in Chinatown on the second weekend in September, on Grant Avenue for Broadway to California Street. (11 a.m. – 5 p.m. both days)

Shakespeare in the Park: Much Ado About Nothing (Saturday, Sunday, and Monday, September 3-5)

If you’re not at Burning Man on this Labor Day weekend, the SF Shakespeare Festival’s free offering Much Ado About Nothing is at the Jerry Garcia Amphitheater in McLaren Park every day this weekend, and the next weekend too. (2 p.m.)

As every year, there’s a whole summer full of outdoor movie screenings at various San Francisco parks. This Raiders of the Lost Ark screening is just one of them, and while seating is free, the SF Parks Alliance is running a contest for reserved seating and other prizes for each show. (5:30 p.m.; film starts at 7:30 p.m.)

This was just announced! Flower Piano is back for 2022, and while we only have dates announced, the SF Botanical Garden says “we are excited to bring back Flower Piano to transform San Francisco Botanical Garden once again into the city’s own alfresco concert hall where everyone is invited to play and listen.”

A new SoMa tradition that started last year returns for 2022. Skybridge on Stevenson kicks off Thursday, Septemeber 15 and continues every Thursday through November 17, with live musicians, DJs, and art installations at the 500 block of Stevenson Street between Sixth & Seventh Streets. (6-9:30 p.m.)

We do know that a brand new, Goldenvoice-organized EDM festival called Portola is going to be happening at Pier 70 this same weekend, so manage your schedule accordingly.

The Hardly Strictly Bluegrass website  does say “Save The Date, Sep 30, Oct 1, & Oct 2, 2022.” There are no musical acts or times announced yet, but that lineup announcement usually doesn’t come until August.

We can say for sure that there will be another Castro Street Fair this year, as the fair’s website says “WE’RE EXCITED TO BE BACK IN THE CASTRO, ON SUNDAY OCTOBER 2, FOR THE 48TH ANNUAL CASTRO STREET FAIR. MORE INFORMATION SOON!”

Fleet Week also technically starts the weekend of October 2, but the main (and very loud) Fleet Week Air Show event is the following weekend (October 7-9, 2022). While you can buy prime seating if you’re so inclined, there are several excellent free spots to watch the air show, like Crissy Field, Fort Mason, and Pier 39. (11 a.m. – 4 p.m.)

The bears are back for the “fair for every bear” that debuted in 2021 and returns to South of Market for 2022. The Sisters of Perpetual Indelugence and Bears of San Francisco will puts some hair on your chest with a full day of  DJs, live music, wrestling, and general shirtlessness. (Time TBD)