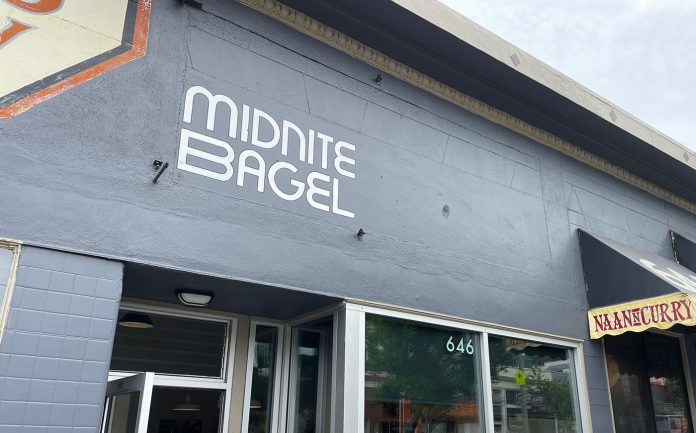 After months of anticipation, Midnite Bagel quietly opened its first brick-and-mortar shop this week in the Inner Sunset, and by Saturday word had gotten around.

Former Tartine head baker Nick Beitcher began delighting San Franciscans with his sourdough bagels via a pop-up that began making evening appearances at Tartine in 2019. During the pandemic, Beitcher secured himself a commissary kitchen in the Dogpatch out of which he began a bagel and bread wholesale and delivery business — and Midnite Bagels products began appearing on the shelves at Bi-Rite and elsewhere.

In February we learned that Midnite Bagel would be getting a brick-and-mortar shop at 646 Irving Street (near 8th Avenue), and Hoodline reported last month that the opening was imminent. And the place finally swung open its doors on Wednesday, June 1.

“The City and all of its wacky, magical inhabitants have been so good to us, and the act of opening our door and inviting you into our space… will feel simply incredible,” Beitcher wrote on Instagram.

Midnite Bagel was one of a handful of bagel operations that was name-checked in last year’s incendiary New York Times article that declared “The Best Bagels Are In California (Sorry, New York).” It may or may not be absolutely true that bagel purveyors in L.A. and the Bay Area have eclipsed their New York counterparts for the first time in recorded history when it comes to quality (but I will say I’ve had Courage Bagels in L.A. and that shit is good and lives up to the hype, if you care about good bagels).

And the lines are sure to form outside the new Irving Street shop, much as they have most mornings — but especially weekend mornings — outside Schlok’s at Fell and Divisadero.

Where Shlok’s bagels are on the less dense end of the spectrum, while still giving a satisfying chew — perhaps thanks to conventional yeast — Midnite’s bagels are denser and richer in flavor, and can be quite chewy. The flavor is top-notch, but a word of caution: My bagel sandwich, after spending a half hour in a box on the way home, was almost unpleasantly chewy before I took the toppings off and re-toasted it. Toasted at home and then topped with cream cheese and lox, this may be the best bagel ever to grace San Francisco. But I would recommend buying fresh, whole bagels ($3 each) and the toppings separately at the shop and doing the toasting and assembly at home if you want to get what I mean. The toaster does some magic with the texture of these naturally leavened bagels that brings them back to the state of being twenty minutes out of the oven — a little crispy on the outside, densely bready on the inside — which is probably the moment of their peak perfection.

Beitcher makes a couple of bagel flavors you won’t find in many other shops: pumpernickel and buckwheat-black sesame, the latter of which has black sesame seeds in the dough and is a uniquely delicious creation. And in addition to bagels, the new brick-and-mortar shop offers whole loaves of fresh bread daily, including the bread version of that black sesame bagel that goes equally well with cream cheese. There are also extra-onion-filled bialys, and rotating sweets that currently include passionfruit macaroons, buckwheat-banana muffins, and a currant scone with coffee glaze.

Bagel topping options at Midnite Bagel include plain, scallion, and jalapeno cream cheese, as well as butter, jam, honey, cashew cheese, Humboldt Fog cheese, and almond butter. And the smoked salmon and veggie sandwich options can be made closed or open-faced, each topped with lemony pickled onions, capers, and dill.

The place opens at 8 a.m., so if you want to avoid long lines and sold-out flavors, you know what to do.

Facebook
Twitter
Pinterest
WhatsApp
Previous articleUmpteenth Bill to Extend Last Call to 4AM at Bars In Some CA Cities Introduced By Wiener In Legislature
Next articleYour SF Summer and Fall Street Fair Mega-Preview, Covering Every Weekend From June to October