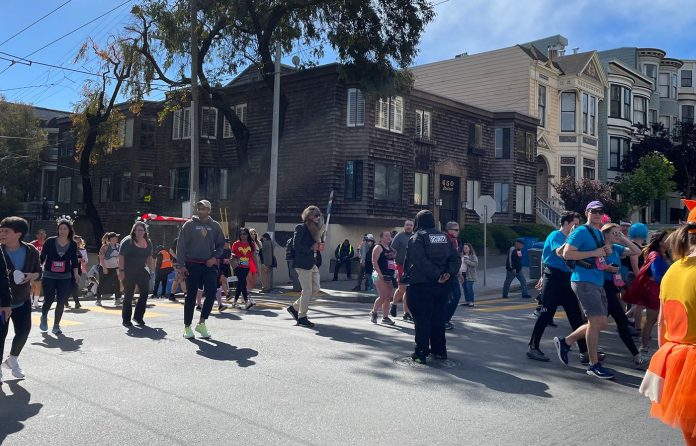 The SFPD didn’t seem too concerned with the usual shenanigans of Bay to Breakers, at least when it came to people carrying around Trulys and bottles of Champagne. But a private security firm was hired to police any and all booze mid-way up Hayes Hill, and they meant business.

Sunday’s Bay to Breakers went off without any major hitches, amid decent if chilly weather, and as far as we know no one died.

There was the usual amount of brazen nudity, and there were many silly costumes, mostly of the Party City variety. But SFist observed some private security personnel stationed at Hayes and Steiner, just before runners and walkers hit the fenced-off Alamo Square Park, making a sort of pointless gesture toward enforcing the ban on alcohol — taking away the bottles, cans, and cases of beers/seltzers that people were toting up the hill.

I say pointless because this enforcement was only really possible when the crowd had thinned down to stragglers, and the only people who saw their recently purchased beverages tossed in the recycling bin — an infraction by Recology standards since they were throwing away full bottles and cans! — were those carrying them out in the open, unaware that they would be paying this toll.

One security guard was being particularly eagle-eyed and intercepting nearly everyone who passed around 9:30/10 a.m., forcibly taking away their drinks and tossing whole boxes of Coronas, etc., into the bin. He even pulled a couple aside pushing a stroller with a live child in it, in order to grab the bottle of Champagne they had tucked underneath the kid. The nerve!

In another instance, we saw some inebriated bros encounter the fun police, create a distraction, and then just run away with their beers back down Hayes Street — likely all they had to do was take a one-block detour around this guard post, and they could have continued on drinking without wasting any beers.

Sure, in previous years we’ve seen someone try to duct-tape forties to their hands to try to evade the SFPD, and there’s been some light enforcement of the booze ban since it was officially put in place a decade ago. (It’s also been ten years since anyone could push a rolling keg through the route and call it a “float.”) But now that this whole show is being run by a Republican who gives money to people like Marjorie Taylor Greene, perhaps we can expect more such enforcement in years to come, or until someone else buys the rights to Bay to Breakers back from North Carolina-based Capstone Event Group.

Pro tip for next year: Put your cocktail in a canteen/reusable water bottle, or a coffee cup, and no one will bother you.

And, regardless, very many people were very drunk in SF on Sunday morning, on and off the race route. I guess Rec & Parks can be grateful that 2% of the bottles headed toward the Panhandle ended up in a recycling bin. Kudos.

Related: It’s Back! Your 2022 Bay to Breakers Liquor Store Map Is Here, as the Race Returns Sunday

Facebook
Twitter
Pinterest
WhatsApp
Previous articleMonday Morning Headlines: Why Are SF’s COVID Cases So Much Higher Than Other Cities?
Next articleSF’s Homeless Population Actually Declined During the Pandemic, and Nearly 20% More Are Sheltered