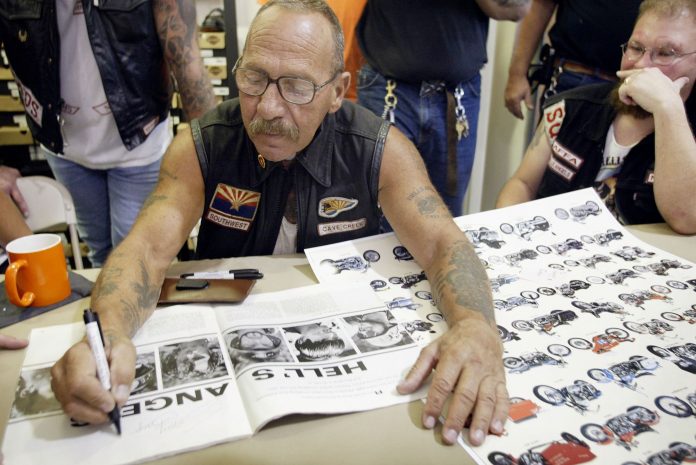 A figure in Hunter S. Thompson books who elevated the Hell’s Angels to a national movement, Oakland Hells Angels chapter founder Sonny Barger has passed away at 83.

The Hells Angels motorcycle club originated in San Bernardino in the late 1940s. But the Hells Angels we know today were styled after the influential Oakland chapter that was founded in 1957 by biker Sonny Barger, who united many smaller gangs into a national structure (and for a period in the 1970s, ran that structure from a cell in Folsom Prison). Barger has just died of cancer, according to the New York Times. He was 83.

“I’ve lived a long and good life filled with adventure. And I’ve had the privilege to be part of an amazing club,” Barger wrote in his farewell post. “Although I’ve had a public persona for decades, i’ve mostly enjoyed special time with my club brothers, my family, and close friends.”

“Please know that I passed peacefully after a brief battle with cancer.”

The Times has an interesting timeline of the history of the Hells Angels, showing how the group earned their share of scrutiny from law enforcement once they became prominently known. But they also grew by becoming a counterculture force, via Hunter S. Thompson’s 1967 book Hell’s Angels, the Jack Nicholson movie Hells Angels on Wheels, and Tom Wolfe’s The Electric Kool-Aid Acid Test.

Of course, these days, the Hells Angels would be more remembered for their disastrous involvement as security personnel at the Altamont Free Concert in Livermore in 1969, for which they were reportedly compensated with “$500 worth of beer.” One Angel stabbed and killed a man, and three other people died accidentally at the event.

Many of these obituaries and memorials of celebrity outlaw figures end with the subject chilling out gracefully in their autumn years; Sonny Berger’s does not. He faced narcotics and murder charges throughout the 70s and 80s, and did not ultimately leave prison until his mid-50s.

After that, he become notoriously protective (and litigious) about the Hells Angels logo and intellectual property. According to a 2013 New York Times profile, Barger helped bring lawsuits over the use of the Angels’ logo against “large, well-known corporations like Toys ‘R’ Us, Alexander McQueen, Amazon, Saks, Zappos, Walt Disney and Marvel Comics.” They reportedly also brought legal action against “a teenage girl who was selling embroidered patches on eBay with a design resembling the group’s ‘Death Head’ logo.”

Image: QUINCY, IL – AUGUST 23: Sonny Barger, founder of the Oakland, California charter of the Hells Angels motorcycle club, autographs a copy of Post magazine during an event at a Harley-Davidson motorcycle dealership August 23, 2003 in Quincy, Illinois. The November 20, 1965 issue featured a cover story about the Hells Angels. Harley-Davidson will celebrate the company’s 100th Anniversary on August 31. (Photo by Scott Olson/Getty Images)

Facebook
Twitter
Pinterest
WhatsApp
Previous articleThursday Morning What’s Up: Oakland School District Moves Ahead With Closures
Next articleSuspect In Austin Murder of SF-Based Cyclist Captured In Costa Rica After Going On the Run for 43 Days