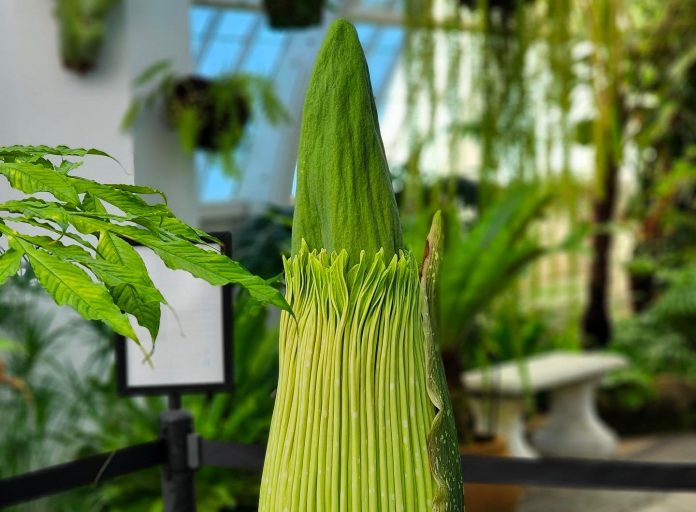 One of the Conservatory of Flowers’ Corpse Flowers Is About to Bloom Again, May Be In Full Stink By Saturday

It’s that time again over at the San Francisco Conservatory of Flowers, with one of their five corpse flowers about to be in full bloom for the first time in five years.

Chanel the Titan, one of the five endangered corpse flowers in residence, may have last bloomed four or five years ago — the plant appears to have been a gift from UC Santa Barbara, where we know it bloomed once in 2013. The plants take seven to ten years to reach maturity and begin their bloom cycles, and then they only bloom for about two days every three to five years. Chanel looks to be getting ready to bloom either by late Friday, or on Saturday. The peak bloom typically occurs at night — and so does the rotten stench, which has been compared to stinky cheese, or the whiff of a dead rodent in the walls.

Whenever one of San Francisco’s examples of a Titan Arum or Amorphophallus titanum goes into bloom, it is called a “rare” event in the local news media. But now that the Conservatory of Flowers has five of these bulbous beauties, it’s more like an annual or at most biennial occurrence these days — with the last blooming of the plant called Terra the Titan in September 2020, when the Conservatory was closed to visitors, but some came to see the plant through plexiglass anyway.

Terra was a gift to the Conservatory by a local collector who had propagated the plant from two others that live at the UC Berkeley Botanical Garden. The collector had raised the plant from infancy in 2008 to 2014, at which point the seven-foot-tall plant had outgrown his bathroom where it lived.

A private collector in Alameda had a corpse flower go into bloom last year, in May 2021, and they wheeled it out to a defunct gas station for people to come get closer looks than the Conservatory usually allows.

And in the summer of 2018, the Conservatory had two of its Titan Arums bloom, Amor the Arum and Suma the Titan.

The Conservatory has put up a live stream of Chanel the Titan, sitting in the muggy West Gallery, on YouTube, so you can check in on the plant over the next couple of days.

It’s now free for San Francisco residents to visit the Conservatory during regular hours, but it sounds like they’re looking to capitalize on this corpse flower bloom, and the $13 adult admission fee will be charged for the extended hours that will happen when the bloom occurs, possibly tonight or Saturday and/or Sunday.

Examples of the Titan Arum, native to Sumatra, are dwindling in the wild, which have made these popular plants to propagate at botanical gardens. The Chicago Botanic Garden, for instance, has six of the plants, and put out the explainer below showing the typical annual leaf cycle of the plant, versus the flower cycle that happens at three- to seven-year intervals.

Related: Rare Corpse Flower Shows Up at Abandoned Gas Station In Alameda, and Residents Line Up for Photos

Photo via Conservatory of Flowers/Facebook