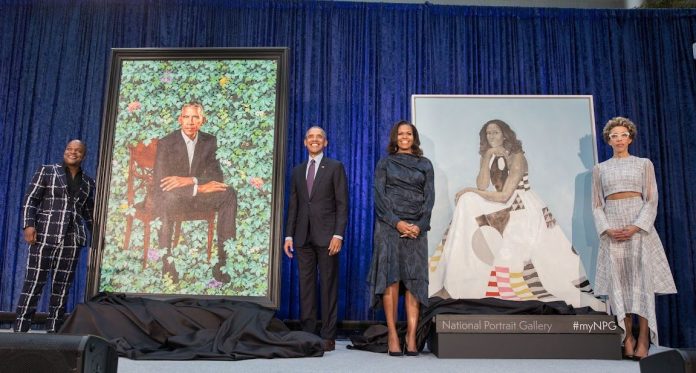 It’s free admission both Saturday and Sunday to see those life-size Barack and Michelle Obama make their San Francisco debut at the de Young, and they remain on display there until August 14.

We would understand if you are angry at the de Young Museum over their ongoing meddling to bring cars back to JFK Drive in Golden Gate Park, and there is some social media chatter about a boycott of the museum. But you can just go and not pay! You have that option this Saturday and Sunday, at least, as the famed Obama Portraits make there SF debut there this weekend, and admission is free on Saturday, June 18 and Sunday, June 19.

Though as the de Young explains, admission is “on a first-come, first-served basis, on-site only. Limit 4 per family, space is limited.”

Both the Barack Obama and Michelle Obama portraits are there, the famous ones that were unveiled in 2018, and both works are by the first Black artists ever commissioned for the President’s and First Lady’s official portraits, Amy Sherald and Kehinde Wiley.

“Wiley and Sherald are the first African American artists to have been selected for the Portrait Gallery’s official portraits of a President or First Lady,”the de Young says in a release. “The two artists worked independently from each other; however, in painting these two portraits Wiley and Sherald effectively re-envisioned the centuries-long tradition of representing political leaders. Before photography, painted portraits often served as the primary image of a U.S. president.”

In terms of the free tickets Saturday and Sunday, as we said, it’s first-come, first-served, and there are no advance tickets being offered. The opening time is 12 noon, so you’re advised to get in line as early as possible in the morning. According to the de Young. “This day includes live music by cellist and vocalist Mia Pixley, accompanied with dance performances from Kimberly Olivier, and a free portrait session with First Exposures alumni.”

After this weekend, a look at the exhibit’s calendar shows that Saturdays will remain free, though you do have to register in advance, and admission is $15 on Tuesdays, Thursday, Fridays and Sundays. The museum is closed on Mondays (except July 4) and Wednesdays are “members only” days. Kids 17 and under are admitted free, but also need advance RSVP. Your admission allows you to see the museum’s whole collection.

So why does Barack Obama’s portrait have flowers behind him? Funny you should ask! According to the de Young’s release, the flowers have a “special significance in the life of the President and his family. Included are chrysanthemums as the official flower of Chicago; jasmine, which pays homage to the sitter’s birthplace and upbringing in Hawaii; and purple African lilies, which are native to Kenya.”

Michelle Obama’s portrait, respectively, depicts “the modernist traditions of abstract art and the traditional patterned quilts of the Gee’s Bend community in Alabama,” according to the same release.

There are various Saturday events to go along with those free admission Saturdays. On Saturday, June 25, there’s a retrospective on the youth photography mentoring program First Exposures. Saturday, July 30 is Art, Fashion, Activism with Youth Art Exchange, and the Saturday August 6 is at 826 Valencia, Poetry and Storytelling with 826 Valencia

Facebook
Twitter
Pinterest
WhatsApp
Previous articleOne of the Conservatory of Flowers’ Corpse Flowers Is About to Bloom Again, May Be In Full Stink By Saturday
Next articleLocal Queer Singer Michael Martinez Releases Moving Song About Coming Out, Just In Time for Pride