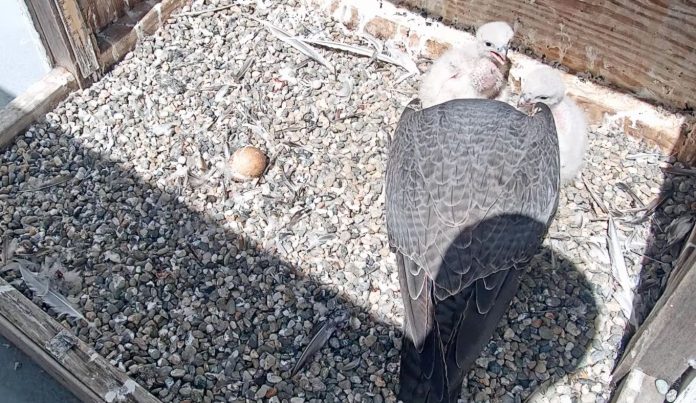 Just a quick update from the falcon cam atop the UC Berkeley Campanile: Two out of three eggs hatched, and the two chicks are now 11 and 12 days old and eagerly scarfing down whatever prey mom Annie and stepdad Alden bring them.

SFist reported on the first hatchling appearing on May 5 (pictured below), and his/her sibling appeared out of their shell the next day. The third egg in this clutch proved non-viable. As the Cal Falcons experts explain, this could have been because of a genetic abnormality, “or because it got too hot or too cold at some point, or it may not have been fertilized.”

The first hatchling on March 5.

These are the 14th and 15th chicks produced by Annie since mating with Grinnell in this nest in 2017, and they are the last to be sired by Grinnell before died in downtown Berkeley, likely after being struck by a car, in late March.

A nearby young male, called a “floater,” had been circling around the nest in the month before Grinnell’s death, so Annie was already familiar with him. The pair quickly courted and bonded as Annie laid her eggs, and the new male — named Alden by popular vote, after a former museum director at the university — has proven to be a loyal and effective mate. (Though the Cal Falcons group has noted on Twitter that he’s had a penchant for bringing weird prey for the chicks to eat.)

Alden never stops hunting. Although he should maybe learn when something is too small for the chicks. pic.twitter.com/rZrLd5Afah

Yesterday’s feed showed the chicks getting a rodent lunch (it’s below if you can stomach it).

Today’s lunch was a substantially sized bird which was thankfully blocked from view, mostly, by Annie, while the feeding took place.

And here are the two babies with full gullets:

According to UC Berkeley’s news site, here’s what we have to look forward to:

By Day 10, they will start growing their wing and tail feathers, can keep themselves warm and will be able to eat more complete meals.

About [two weeks from now], their legs will be fully grown, and around the end of May, they will be banded and their sex can be determined. At that point, Annie and Alden will spend less and less time in the nest while the chicks start exploring on their own. The campus’s annual Fledge Watch, a period of time when the youngsters begin flying and volunteers position themselves near the tower to monitor their progress, is expected to begin in mid-June.