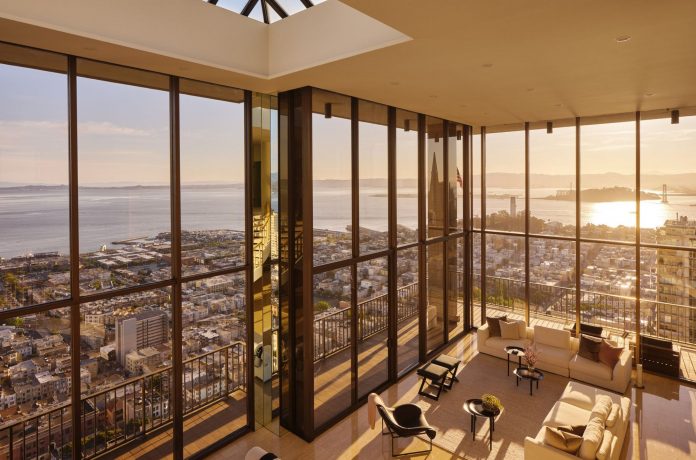 A pair of truly unique, top-of-the-world, master-of-the-universe-type properties sitting at one of the highest points in San Francisco — looking down upon and out across the entire city and the Bay — are about to come on the market. And they’re in a storied tower that has been home to San Francisco’s wealthy for decades.

It’s a pair of semi-adjoining penthouses that were most recently owned by former Secretary of State George Shultz and Charlotte Mailliard Shultz, and before them Al Wilsey and Pat Montandon — and figured in Sean Wilsey’s memoir Oh the Glory of It All. They’re on the top (32nd) floor of 999 Green Street, a.k.a. The Summit, and once dubbed Eichler’s Summit by developer Joseph Eichler, who also lived in the building after it was completed in 1965.

Designed by architect Tibor Fecskes of Neill Smith & Associates, with interiors designed by Eichler staffer Claude Oakland, The Summit was converted to condos in 1974 and the elder Wilsey was among the first buyers.

Charlotte Mailliard Shultz, who passed away in December, resided in the north-side penthouse for a decade before marrying George Schultz in 1997, at which point the pair bought the south penthouse, as the Chronicle explains.

Now, the two penthouses, with equally glorious floor-to-ceiling windows and spectacular views, separated by a foyer, are for sale separately or as a pair. Co-listed by Compass agents Karen Mendelsohn Gould and Max Armour, The Penthouses at The Summit, as they’re being called are listed at $17 million and $12 million, respectively.

Per the Chronicle, the Schultzes primarily resided in the three-bedroom, 5,380-square-foot north penthouse — which Charlotte Schultz had lived in with her late second husband Melvin Swig. The slightly smaller south penthouse they used primarily for entertaining.

“The views, the building, the piece of San Francisco — any one of these would make this exceptional, but the three of them together, there is nothing that compares,” says Gould, in comments to the Chronicle. “You cannot find another property like this in San Francisco.”

She added, “This stands on the world stage,” when it comes to luxury homes, and penthouses.

As this 2006 piece from The Eichler Network explains, even back then the building was filled with a lot of mostly unoccupied pied-a-terres for the world’s wealthy, though there are some longtime, elderly residents. Most of the units have been completely redone since the Eichler days and few have original details. And residents did note a downside: With only two elevators and no freight elevator, one of the elevators is frequently in use during the day with the many remodels that residents undertake.

Both penthouses are two-story with bedrooms upstairs, and come with in-unit lifts for those who need to skip the stairs.

Certainly the pictures are stunning! But in addition to the glamour of the spaces and those drop-dead views, you can’t divorce the north penthouse from the history. As the home of Pat Montandon before, during, and after her widely publicized divorce from Al Wilsey — who left her for her onetime friend and fellow socialite, Dede Traina, after John Traina passed away in 1980 — the apartment is a necessary location from which one would shoot the as-yet unfilmed story of this very San Francisco drama. It was depicted both in Sean Wilsey’s memoir and in Montandon’s follow-up answer to her son’s book, Oh the Hell of It All — and fans of Armistead Maupin know that Montandon was caricatured as Prue Giroux in his Tales of the City series.

Both condos are listed as “coming soon.” Interested parties can “RSVP” here.

View from the south Penthouse. Photo by R. Brad Knipstein for Compass

View from the south Penthouse. Photo by R. Brad Knipstein for Compass