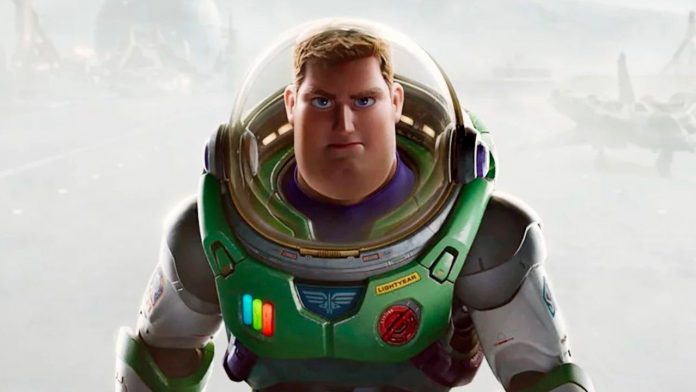 Disney removed a same-sex kissing scene from the upcoming Toy Story installment Lightyear, but an uproar from artists at Emeryville-based Pixar got that gay kiss right back into the animated feature film.

Bay Area movie audiences sure love their Toy Story sequels, partially because the production team of this Disney franchise is Emeryville-based Pixar Studios. And this summer’s runaway blockbuster family movie hit is guaranteed to be the new Toy Story prequel Lightyear, the latest Disney-Pixar addition to the popular animated franchise, which opens in theaters June 17, and is also playing at the 2022 Frameline LGBTQ+ Film Festival two days later for a free Family Matinee screening at the Castro Theatre (RSVP is required).

Wait, why is a Toy Story movie playing at the Frameline festival? Because in a historic first, it depicts the first-ever same-sex kiss in a Disney animated film. The story of how that kiss got into the film — and then got back into the film after Disney’s censors cut it — is its own Toy Story story about the advancing anti-gay and anti-trans legislation in contemporary America, and how Pixar’s employees were determined to not let those efforts dilute the story they hoped to tell.

First, the basics: Pixar Studios is a subsidiary of the Walt Disney Company, the subsidiary that has made all of the Toy Story movies — going back to the days when Pixar was still independent and Toy Story was its first feature film, and also the first computer-animated feature film ever made.

Disney has milked the Toy Story franchise for three subsequent feature films, so like Star Wars, they’re now building the franchise through prequels and stand-alone origin stories. In this one, formerly Tim Allen-voiced lead character Buzz Lightyear gets his “origin” as the younger version of himself voiced by Chris Evans (Captain America), in a ‘film within a film’ concept that shows us the movie that made the Buzz Lightyear toy popular in the fictional Toy Story universe.

This is self-referential. While Toy Story movies these days tend to gross about $1 billion worldwide, the merchandise from the movies makes multiple billions of dollars. The Walt Disney Company knows where their bread is buttered, and they prefer sure things, not risky things.

In the third trailer seen above (and there would also be a fourth), we meet the supporting cast.  Buzz Lightyear’s sidekick Alisha Hawthorne is voiced by Uzo Aduba (Crazy Eyes from Orange is the New Black). We also have celebrity voicings from Taika Waititi and James Brolin in the mix.

And we now know that at some point in the film, the Alisha Hawthorne character kisses her female romantic partner on screen.

We don’t know when exactly Disney executives saw fit to remove that scene. But we do know that Variety reported on March 9 that LGBTQ employees at Emeryville-based Pixar sent an angry statement to Disney decrying that the company has cut “nearly every moment of overtly gay affection” from the films Pixar has produced.

For context, this was just days after Disney CEO Bob Chapek was widely criticized by Disney employees for the company’s silence on Florida’s “Don’t Say Gay” bill, a stance he reiterated in an internal meeting with Disney LGBTQ employees. It also came on the heels of an Orlando Sentinel report that Disney gave money to every Republican co-sponsor of that bill. If you’re now aware, Disney has a very large amusement park in Florida.

“We at Pixar have personally witnessed beautiful stories, full of diverse characters, come back from Disney corporate reviews shaved down to crumbs of what they once were,” the letter said, according to Variety. “Even if creating LGBTQIA+ content was the answer to fixing the discriminatory legislation in the world, we are being barred from creating it.”

The letter worked. On March 18, Variety reported that the same-sex kiss was reinserted into Lightyear. “Following the uproar surrounding the Pixar employees’ statement and Disney CEO Bob Chapek’s handling of the ‘Don’t Say Gay’ bill, however, the kiss was reinstated into the movie last week,” Variety reported.

You can argue whether this really is Disney’s first same-sex kiss. Disney-owned Marvel Studios had two men kissing in 2021’s Eternals. Some little-known Disney cable channel called Disney XD aired a cartoon with same-sex kissing in 2017 on a show called Star vs. the Forces of Evil. But this is the first incidence of same-sex kissing in a major theatrical animated Walt Disney Company release.

Autostraddle has specific spoiler details about the kiss, which they call a “Lesbian Astronaut Kiss,” and all the specific surrounding plot points that lead up to it. Apparently the kiss happens within the first 30 minutes of the film. So if all you want to see is the first-ever same-sex kiss depicted in a Disney animated film, you don’t have to sit there for infinity and beyond.