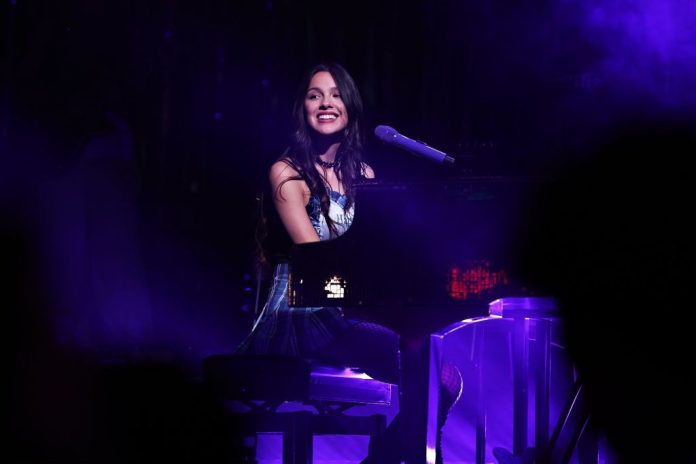 The 19-year-old singer-songwriter—who, since releasing her debut album Sour in May of 2021, has become the reigning star of the Gen Z era—played her impressive discography in front of a sold-out crowd Friday night in San Francisco, cementing her place in pop culture stardom and the ability for commanding a stage.

Cast your mind back to January of 2021 for a brief moment: It had been less than a month since the FDA granted emergency use to the Pfizer COVID-19 vaccines, an insurrection at the Capitol Building created widespread pandemonium (as well as safety concerns around Inauguration Day), and an 18-year-old songstress — shot from the Disney talent cannon — broke streaming records across multiple platforms with her now-ubiquitous song, “Drivers License.”

Fast forward to the present moment, and Olivia Rodrigo has taken music on a refreshing whirlwind spun around hit after hit, all of which has culminated in her sold-out, 33-stop North American leg of her “Sour Tour” that ended in San Francisco Friday evening. The occasion was an objectively monumental one; it even elicited City Hall to glow the tour’s primary color scheme: purple and a golden-hued orange.

SFGate reported that lines stretched twice — two times! — around Bill Graham Civic Auditorium and up toward City Hall leading up to her 8 p.m. show Friday evening. Concertgoers were decked out in purple regalia, holstering signage, and taking pictures in front of the Sour tour bus, which sold tour merchandise to an overwhelmingly young crowd of teens and early-twentysomethings.

Once in, fans were apparently treated to an hour-long spectacle that solidified Rodrigo’s reign as pop tour de force. Cooning through her twelve-track LP —with, as SFGate noted, a display of her “theater-kid prowess”—Rordigio enspelled the 8,500 attendees with her vocal range, lyricism, and cathartic dances that evoked teenage the joy, tumultuous nature, and overt awkwardness that entail barely being old enough to steer a vehicle.

During the tour, Rodrigo’s shows have also doubled as a soapbox for social and political commentary. She’s taken time to discuss the importance of abortion rights in this country (and her support of them) and, as of recent, the need for better gun control laws and regulations after this week’s massacre in Uvalde, Texas that claimed the lives of nineteen children and two adults.

Through the otherwise heartbreaking, despondent events of the past few months, Rodrigo has proven herself to be a balm and source of both cathartic levity and escapism amid these chaotic junctures. And her San Francisco stop might’ve just been the zenith of her on-stage presence introduced on this tour, thus far.

“God damn, I really did save the best show for last,” she apparently joked at one point, smiling as the crowd howled and sang back to her.

If you weren’t among the thousands of doting, vociferous fans at Rodrigo’s San Francisco concert last night, feel free to live vicariously through some of the concert’s best moments uploaded to social media.