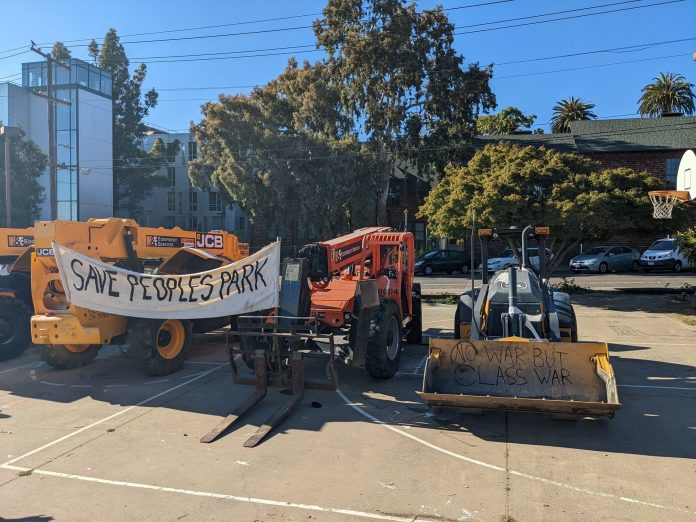 A very Berkeley problem in Berkeley, as protesters have occupied People’s Park to halt a development project, but the Alameda County Sheriff’s Department is refusing to help clear them out, because the city of Berkeley won’t let them use tear gas.

The rabble-rousers whose protests have halted the demolition and redevelopment of Berkeley’s People’s Park into a 16-story student housing project lobbed their latest attack Thursday, as the Berkeley Daily Planet reports the activists filed an appeal of last week’s legal ruling that allowed the park to be razed and construction to begin.

All quiet at People's Park at the moment, except for Rage Against the Machine (No Shelter) playing from speakers set inside construction equipment. A banner hangs between the vehicles. Several activists are occupying the park overnight. pic.twitter.com/FbGqy4MUaP

But on the ground in People’s Park, a KTVU report tells us that on Thursday, protesters were “camping out in tents, hoping to stop construction crews who began clearing trees” and that “construction equipment at the park had been taken apart, tagged with [graffiti] and smashed.”

Absolutely bonkers that after destroying People's Park and chopping down all the trees, they leave millions of dollars worth of machinery out to get rekt.#SavePeoplesPark pic.twitter.com/vSDGygaU6J

But that KTVU report also spells out a very Berkeley problem that the city and University of California (UC) have. Per KTVU, the Alameda County Sheriff’s Office is refusing to help clear protesters out of the park because the city of Berkeley does not allow law enforcement to use tear gas on protesters.

This obviously harkens back to the 2011 UC Police pepper spray cop incident that launched a million memes. But that 2011 incident happened at UC Davis, not UC Berkeley, and it was during the whole Occupy movement. The Berkeley pepper spray ban was passed by City Council during the George Floyd protests of June 2020, and prohibits “the use of tear gas, smoke and pepper spray.”

But as Berkeleyside explains, there’s an alphabet soup of different law enforcement agencies that can be employed on this land that is owned by UC. The UC Berkeley Police (UCP) were used in Wednesday’s actions, and the school has since called in other UC schools’ police departments. (Fun fact: The pepper spray ban does not apply to them!) The Berkeley Police Department (BPD) and Alameda County Sheriff’s deputies are restricted by the pepper spray ban, and Berkeleyside adds that on Wednesday, “UCPD called in police from other UC campuses, Cal State University and the California Highway Patrol to respond.”

Here is @JesseArreguin's explanation for why he called, then canceled, a special meeting where the City Council could have lifted Berkeley's ban on police using tear gas during protests at People's Park https://t.co/gpDuIevgi5 pic.twitter.com/vYYFqxTldx

Berkeley Mayor Jesse Arreguin had called a special emergency city council meeting on Thursday night to urge the council to overturn the ban. And then he canceled that meeting.

“I literally slept on it,” Arreguín told Berkeleyside. “Having thought over the past several hours about this issue, I came to the conclusion that the ban that we had passed in 2020, I still strongly support that. I don’t think that we should use weapons of war in modern policing, and I’m just concerned about the impact it could have on peaceful protesters.”

The history of People's Park in 2 @sfchronicle photos by Greg Peterson in 1969 and @BronteWittpenn in 2022.

This all sounds like Berkeley being extremely Berkeley. But Berkeley has changed, too, and this housing project has pretty strong support from the Berkeley City Council, and polls very well among Berkeley residents, as explained in today’s excellent Chronicle retrospective on the history of skirmishes at People’s Park.

“It wasn’t the first time the 2.8-acre site east of Telegraph Avenue had come to resemble a war zone,” the Chron points out. “Similar confrontations have occurred throughout the park’s history, which began in the late 1960s when UC Berkeley took possession of the land and cleared it of homes, sparking a huge protest that culminated with ‘Bloody Thursday’ in 1969, when sheriff’s deputies shot and killed a bystander.”

Other People’s Park conflicts have been less monumental, but show the sensitivities around any changes to People’s Park amongst a certain Berkeley demographic. “Battles broke out over the university’s plan to build a soccer field in 1971, its effort to pave an area for vehicle parking in 1979, its installation of volleyball courts in 1991, and maintenance work in 2011 that required removal of plants at the park’s western end,” the Chronicle adds.