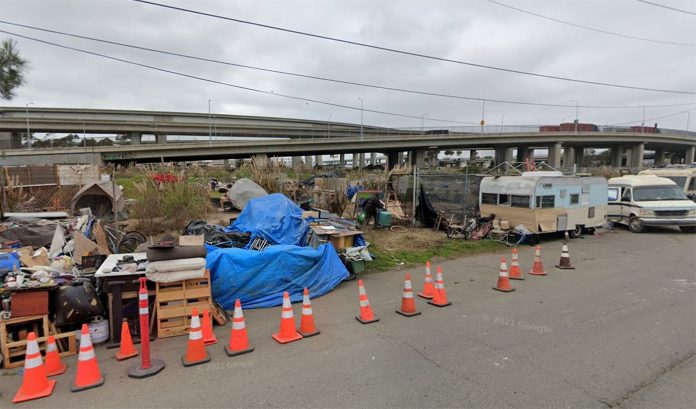 A man was fatally shot Tuesday at the sprawling, multi-block Wood Street homeless encampment in West Oakland — and it’s the second shooting to occur there in two months.

The shooting happened just before 2 p.m. today, and as the East Bay Times reports, the victim was transported to a hospital and later died. It’s not clear whether the man was a resident of or a visitor to the encampment.

A shooting occurred at Wood Street in April in which two people were shot and injured inside an RV.

The encampment on Wood Street, near the freeways and West Oakland BART station, has been the location of blight, crime, fire, and general misery going back about five years. Governor Gavin Newsom toured the site in April, and last month the state offered a $4.7 million grant that is earmarked for the creation of a “community cabins model” at the site — though it’s estimated that the grant will only fund enough cabins to house 50 of the estimated 300 people who currently reside there.

“Encampments across our state are constant reminders of the broken dreams of struggling Californians and their loved ones, making them a stubborn, painful issue that we must tackle with empathy,” Newsom said at the time.

The encampment was the site of 90 fires during the 12 months that ended in March, and one person died in a fire there in April.

Today’s shooting was the 53rd homicide to date in Oakland this year.