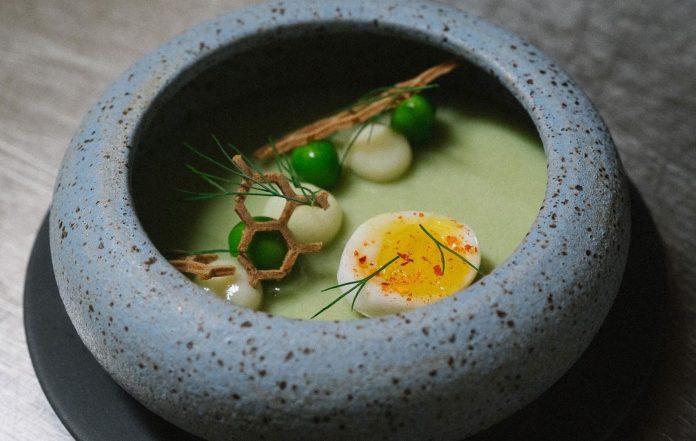 A temporary hotel restaurant hiatus in Union Square just came to our attention via an announcement of a pop-up happening there — which will feature Michelin newcomer of last year Marlena, the Bernal Heights home of which is undergoing a remodel.

Not all Union Square restaurants have returned after taking time off during the pandemic, and one of those is Rambler at the Hotel Zeppelin. It’s not clear if it ever reopened in the last two years, but the Viceroy Group hotel is back open, and they’ve recruited the Michelin-honored chefs of Marlena — the husband-and-wife team of David Fisher and Serena Chow Fisher — to do a summertime pop-up in the hotel’s spacious restaurant spaces.

It’s called Summer Camp at Hotel Zeppelin, it’s currently taken over Marlena’s restaurant website, and starting Wednesday (June 22) it takes over the Rambler spaces. The pop-up actually consists of two menus — a prix-fixe that will be served in the mezzanine main dining room of Rambler, which was once upon a time part of Wolfgang Puck’s Postrio; and an a la carte lounge menu that will be served in the upper, main-level Rambler space and at the bar there.

This appears to be just a temporary pop-up with a specific shelf-life, and Viceroy hasn’t announced what the plans are for Rambler after this pop-up ends after Labor Day.

But, for now, the Fishers are doing a seven-course tasting menu for $125 featuring dishes like pea panna cotta with soft-boiled quail egg and chive tuile (pictured below); a plankton pappardelle with Saltspring Island mussels and a beurre blanc sauce; and a guinea fowl “royale” with porcini mushrooms and ramps. Also, in keeping with the summer camp theme, there is a dessert of do-it-yourself s’mores (also pictured below).

In the upstairs lounge area and the bar, there will be an a la carte menu served that you can see below.

That menu includes the Marlena burger, a Buffalo chicken sandwich, and a roasted black cod dish that sounds like a similar preparation to one that’s on the prix-fixe.

There are also some special cocktails on offer like the R2-D2 (mezcal, pineapple, coconut, and cava), and the Bison (whiskey, honey, mint, and ginger).

Summer Camp at the Hotel Zeppelin goes through September 3, after which point the Fishers will be reopening Marlena at 300 Precita Avenue — it’s been closed for a remodel since the beginning of April. And they will be bringing back the restaurant’s popular $65 prix-fixe when that happens.

Make reservations at Summer Camp at the Hotel Zeppelin here, if you want the seven-course tasting menu, otherwise you can drop in for the menu above.

The bar opens at 4 p.m. Tuesday through Saturday, and dinner is served starting at 5 p.m.