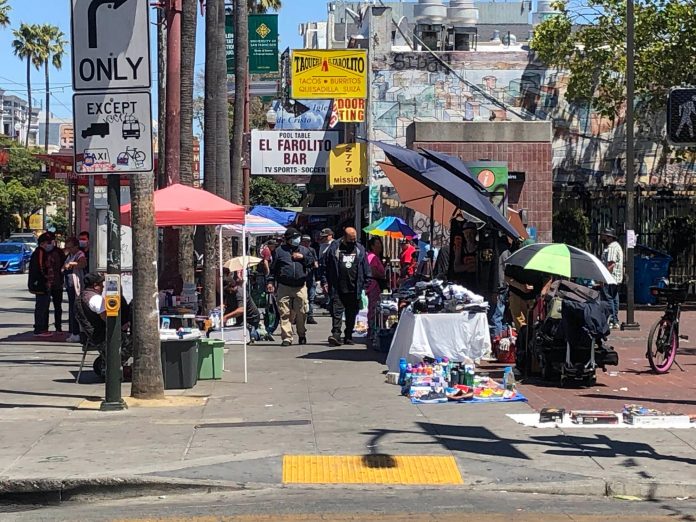 The rollout of the street vending “crackdown” hit the 24th and Mission Street corner bazaar last week, and while there’s been a bit of enforcement, the portal for vendor permit applications is reportedly not even working yet anyway.

The recent proposed Mission District street vending crackdown which passed in March reportedly had its enforcement period begin this past Thursday. And while the legislation is not specific to the Mission, and applies citywide, it is part of Supervisor Hillary Ronen’s plan intended to address stolen goods vending and encampments in the Mission District.

After 6 weeks of outreach & education, today was the 1st day of enforcement of the vendor law I authored earlier in year. For the first time in almost a year the 24th St BART plaza is accessible to passengers & pedestrians. (1/4) pic.twitter.com/35LRGq7Isk

Mission Local sized up the enforcement efforts of Friday and Monday, and noted there were “inspectors from Public Works backed by police officers” clearing sidewalk-blocking and fire hazards. Supervisor Ronen’s tweet above notes that “For the first time in almost a year the 24th St BART plaza is accessible to passengers & pedestrians,” though these images may be just a snapshot at a certain favorable time.

Many of the responses to that tweet note that things were straight back to the previous state by Saturday and Sunday, but we are ostensibly early into this enforcement period. And while Mission Local also assessed Monday conditions, Monday was an oddball outlier. The Warriors championship parade had a little informal afterparty near Mission and 24th Streets on Monday, which drew lowriders, crowds, and of course knock-off t-shirt vendors. You’ll have those t-shiort vendors in any city that just won a major sports championship, and it’s probably too early to gauge the success of the would-be vending crackdown.

Last week, an enforcement blitz at the 24th Street BART Plaza was intended to crack down on vendors selling stolen goods.

But vendors swiftly returned to the plaza once the police had left.https://t.co/vs6dlmX2MB

But Mission Local also points out a very important reason why it’s too early to gauge the success of the permit plan  — many vendors cannot get a permit yet. “The Public Works portal to apply for these new permits is not actually finished and is unlikely to be complete before the first week of July” the site reports. “Vendors have not been able to apply for the required permits.”

This SFist reporter walks by that corner everyday, and I do see encouraging signs (literally). The Calle 24 banners seen above have been displayed on the tables of the obviously legitimate vendors lately, the ones selling fresh flowers or handmade crafts and such.

We’re not sure if these are tied to the permitting process, and SFist has reached out to Supervisors Ronen’s office and Calle 24 for more information. But the Calle 24 Latino Cultural District has been providing a ton of outreach on this program. And if the Calle 24 banner is the de facto proof of a legitimate vending permit, well, that is a system that would make a ton of sense for both shoppers and vendors.

And I know you can’t base laws and legislation on an “eyeball test,” but it’s pretty obvious with a simple glance which vendors are selling stolen goods.

SFist did see DPW trucks at the corner on Tuesday, but again, that could be related to trash pick-up after Monday’s larger-than-normal post-parade crowds. On Saturday, SFist did notice a pair of SFPD officers asking follow-up questions to some of the vendors selling what appeared to be stolen retail items, so that’s a step in the right direction. But Saturday night around 7 p.m. was also pretty much the most trashed we’ve seen that corner from a refuse standpoint, so there may be some, well, fine tuning required of Public Works on this program.

But we should stress that many of these vendors do add vibrancy to the corner, particularly this booth that has its own address sign, and is clearly committed to the bit. Many Mission residents want people selling fresh flowers or bacon-wrapped hot dogs out there. But it may take awhile to strike the right balance between those vendors, and others selling what is clearly hot merchandise.