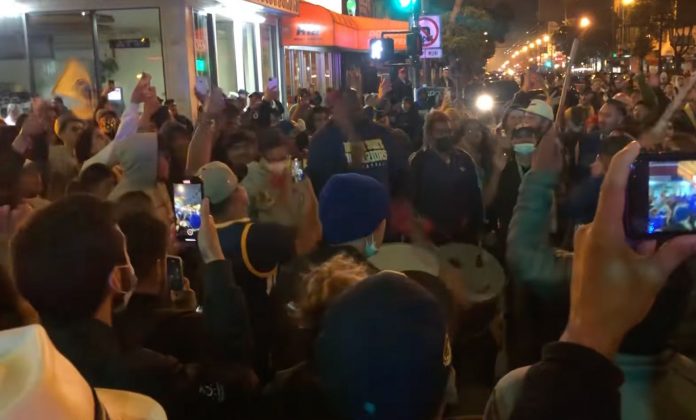 Without specifying any details about the injuries — and oddly we’re only hearing about them five days later — the SFPD’s Mission Station tweeted about multiple officers being injured during the hoopla in the Mission on June 16.

Following the Warriors’ Game 6 victory in Boston, the Mission District erupted, as it usually does following big local sports victories, in outdoor revelry, dancing, fireworks, and general chaos. Unlike in past years, there were no reports of significant vandalism or injuries among fans, thankfully — a fatal shooting occurred outside an Oakland sports bar about an hour after the win, but that was all that’s been reported.

SFist observed Thursday’s revelry around Mission and 24th Street, and noted the SFPD’s closure of Mission Street up to 26th as people were out dancing in the street, and a drum corps arrived. There was also video posted to social media of sideshow donuts being spun elsewhere in the vicinity.

But now the SFPD is categorizing what went down as “a violent riot on lower 24th Street” in which “about 17 officers were injured as a result of the riot.”

Had the injuries been serious, we certainly would have heard about them before now? But you can either take their word for it that these injuries occurred in such large numbers — and that cops didn’t retaliate in response — or not!

After the violent riot on lower 24th Street following the Warriors victory (6/16/22), about 17 officers were injured as a result of the riot. Hoping for speedy recoveries! Thank you to all @SFPD officers who were in the Mission district to help. Stay safe out there! #sfpd pic.twitter.com/9ZjpL4UKf0

The motives for posting this tweet Tuesday morning, the day after a non-violent, citywide celebration that took over Market Street and resulted in no Muni buses set aflame or anyone being seriously injured, seem suspect.

SFist looked through the SFPD’s Daily Crime Summary for the period covering the night of June 16 and the early morning of June 17, and we didn’t see any crimes that looked related to the celebrations. As we reported Friday morning, “There are two reported incidents of ‘shots fired,’ (3:10 a.m. in Bayview, 4:23 a.m. in Bernal Heights,) but no reports of injuries, and these may have been unrelated to the celebrations.” The Daily Crime Summary for the evening did not report any assaults on officers, nor for that matter, any incidents on 24th or Mission Streets.

But anyway, the SFPD would like you to know that all was not calm and peaceful last Thursday, despite reports to the contrary, and 17 or so officers have battle scars to prove it. That is all.

Related: As Warriors Win Title, Mission Street Gets Its Fireworks, Bedlam, and Celebrations On

Facebook
Twitter
Pinterest
WhatsApp
Previous articleCongress Steps In to Save Sequoia Trees, As Nearly 20% Have Been Killed By Wildfires
Next article24th and Mission Vending Laws Kick In, Smattering of Enforcement Observed Thus Far