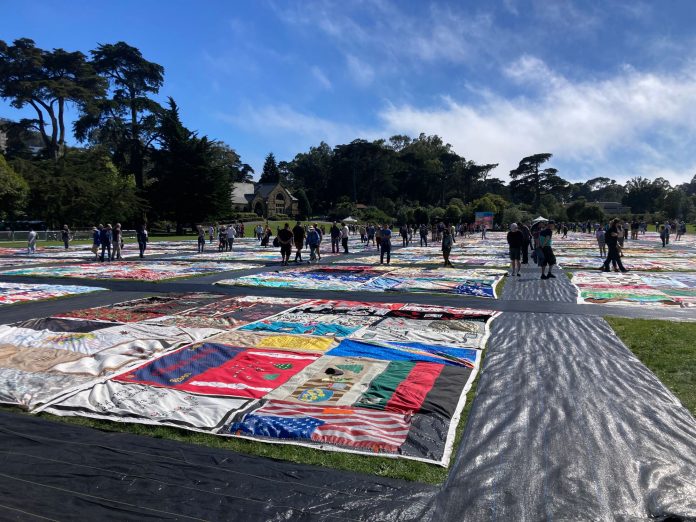 Photos: Largest Display of AIDS Memorial Quilt in a Decade Comes to San Francisco — With All the Emotions

The National AIDS Memorial Quilt spans about 1.2 million square feet over its 48,000 textile panels — sewn and fastened into groups of eight — honoring 125,000 people who have died of HIV/AIDS since 1980. This weekend, 3,000 of those panels covered Golden Gate Park in what became SF’s largest display of the historic quilt, to date.

Marking the 35th anniversary of the National AIDS Memorial Quilt, thousands of activists, survivors (and members of their families), and LGBTQIA+ community allies descended on Golden Gate Parks’ Robin Williams Meadow to criss-cross the sectioned-off pathways between groups of the textile panels.

Come to Golden Gate Park in SF TODAY until 5 PM, when over 3,000 panels from the #AIDSQuilt will be displayed, alongside a robust schedule of events and interactive spaces. See the stories behind the Quilt and honor those we have lost. https://t.co/gEdQJIZw06 pic.twitter.com/QON6GZlzal

Birthdays, personal anecdotes, and pieces of queer art were sewn into some 3,000 panels; the names of the deceased whose names appeared on those panels — “John G.,” “Taylor M.,” “Dad”— were read out loud by dozens of people.

Playing bongos and effusive dancing existed in tandem to those recitings; a visible celebration of life, as well as a reminder to find joy in every second we have on this planet. Generous, kind, warm volunteers helped attendees navigate the maze of panels, offering insights and occasionally a shoulder to wax emotional.

Held this past Saturday and Sunday from 10 a.m. to 5 p.m., the two-day ode included appearances from speakers and performers like Quilt Co-Founders Cleve Jones and Mike Smith, the Executive Director of the Southern AIDS Coalition Duane Cramer, and California State Senator Scott Weiner. Members of SF Gay Men’s Chorus were also present, offering a soul-filling soundtrack to the bustling 5.3-acre meadow.

While all in attendance celebrated the progress in the fight against HIV/AIDS, especially as it pertains to antiviral drugs and preventative medicines like PrEP, the event’s speakers reminded crowds that the crisis is still far from over.

The Quilt has now surpassed 50,000 individually sewn panels — meaning some 110,000 names have been forever enmeshed in roughly 54 tons of fabric. As of publishing, more than 750,000 people have died of HIV/AIDS in the United States. And yet: The Center for Disease Control and Prevention and World Health Organization still classify HIV/AIDS as a lesser “epedemic,” rather than an more severe “pandemic.”

In case you missed seeing some of those panels and names underneath Saturday’s clear skies or Sunday’s mercurial fog, below are some pictures of the history-making display that graced San Francisco this weekend.