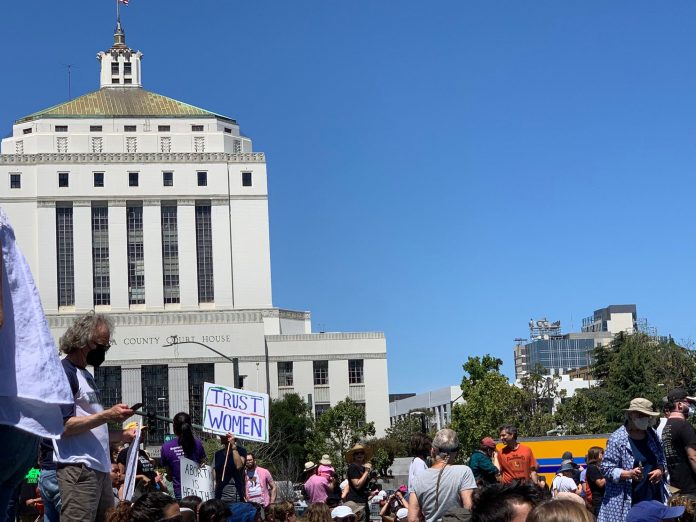 Saturday afternoon saw an estimated 200-plus people organize at Lake Merritt to show their support of reproductive rights and to denounce the possibility of Roe v. Wade being overturned.

A mid-day rally called “Bans Off Our Bodies,”organized by Planned Parenthood, took place Saturday in Oakland in solidarity with abortion activists and those who believe that the overturning of Roe v. Wade would be disastrous for this country. The East Bay display was part of a larger nationwide campaign today to stand in support with reproductive rights; similar displays were observed in other large cities across the country like Los Angeles, Chicago, and New York City.

Proud to stand today w/ @PPActionCA for a #BansOffOurBodies rally today at Lake Merritt in Oakland & to fight for abortion rights & ensure that CA becomes a national beacon for reproductive freedom, not only for Californians but for those who seek abortions here! pic.twitter.com/FTRU2Xz6Jy

During the hours-long rally, Nancy Skinner, the CA state senate member representing East Bay’s District 9, gave an emboldened speech to the crowds. In a snippet uploaded to Twitter, Skinner can be heard at one moment pointing toward a sign in the audience before reading it: “Men making laws about women’s bodies.”

And Skinner’s response was straightforward: “Who the fuck thought that was a good idea?” Well… she does have a point.

If you weren’t around Lake Merritt Saturday afternoon to catch the event’s vociferous happenings and see the incredibly on-point signs, here are a few of our favorite moments uploaded to social media.

Thank you Oakland and Team Lee for showing up and turning out for the #BansOffOurBodies rally today. Grateful to have @BLeeForCongress – a fierce advocate for abortion rights, head of the Pro-Choice Caucus, and abortion storyteller – representing us in DC. #AbortionIsEssential https://t.co/MShrXnvkzs pic.twitter.com/upkC7xvYA6

At the end of today’s #BansOffOurBodies rally in #Oakland. Love seeing all the activism around the country today calling for the Congress to #CodifyRoevWadeNow & here in CA for #CaLeg #CaBudget to ensure #abortionrights. pic.twitter.com/KM9PAQDNe8

With my daughter and hundreds of other #abortionrights advocates at #bansoffourbodies rally Oakland pic.twitter.com/Cqu9DuJNFD