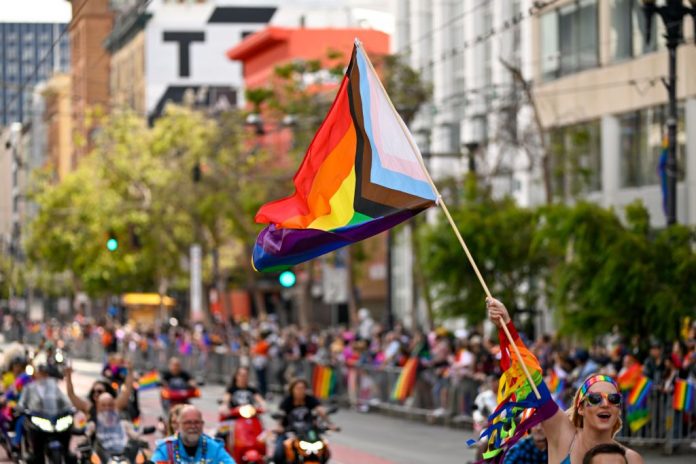 When the pandemic came down in a life-altering thud back in March of 2020, life as we knew it changed forever. The past two years have seemed like, more than anything, a race to a semblance of normalcy. And SF Pride reached that finish line over the weekend.

Over the weekend, San Francisco’s reputation as the LGBTQ capital of the world was reaffirmed as the city thronged multiple parades in honor of queer solidarity.

On Friday, the first in-person Trans March held since 2020 saw thousands of people gather in Dolores Park, before then taking to the streets and, serendipitously, merging with a pro-abortion-rights rally that had appeared along Market Street in wake of the SCOTUS ruling earlier that day.

Saturday’s Dyke March made its magnificent return after a two-year hiatus spurred by the pandemic. Motorcycles were heard roaring as hundreds of marchers made their way from Dolores and 18th up to the Castro where the rally concluded. The mood throughout, while celebratory, was one tinged by an unmistakable somber hue in wake of the overturning of Roe vs. Wade — which has now opened up a chasm filled with crises around bodily autonomy and access to reproductive health resources.

The march was also followed by a concurrent march that came down Castro Street with the chant, “We’re Here, We’re Queer, Fuck the Supreme Court.”

This year, as well, saw the return of the People’s March, which began in 2020 as a communal act of minority solidarity and a reminder that pride began as a riot. Like its past two iterations, the parade — still led and organized by SF-based drag queen Juanita MORE! and activist Alex U. Inn, again running down the Polk Street path of the original SF Gay Freedom Day from the early 1970s — for 2022 paid homage to the rebellious spirit of the Stonewall and Compton’s Cafeteria riots of the gay rights movement. Unlike years prior, the event’s speeches and remarks were reserved for the beginning of the parade, rather than saved for when the group descended outside of City Hall.

San Francisco’s official Pride Parade saw its first run down Market Street in three years Sunday morning. And though the City’s largest annual outdoor event concluded on a strange note — there were reports of fights breaking out; a false report of what sounded like a gun going off ended the parade earlier than scheduled; someone apparently hosed a part of the crowd with bear spray (so… basically, mace) — there was a certain bombastic quality to this year’s SF Pride Parade that made it all feel welcomingly familiar.

If you missed out on some of (or all of) this weekend’s queer frivolity and celebrations (or just want to relive them again), here are some of our favorite images taken during Friday, Saturday and Sunday’s parades:

More photos from #SFpride People’s Pride March led by @juanitamore . We walked with the #dphmustdivest contingent to get law enforcement out of public health facilities. pic.twitter.com/Vfd1Fizrsd

These @UCSFPediatrics residents came to play! And march! And protect the rights of #LGBTQIA #BIPOC children & families.

Power to the People at the SF People’s March.

Nothing like the healing power of SF’s Dyke March 💕❤️ pic.twitter.com/UqcjALX0Pj