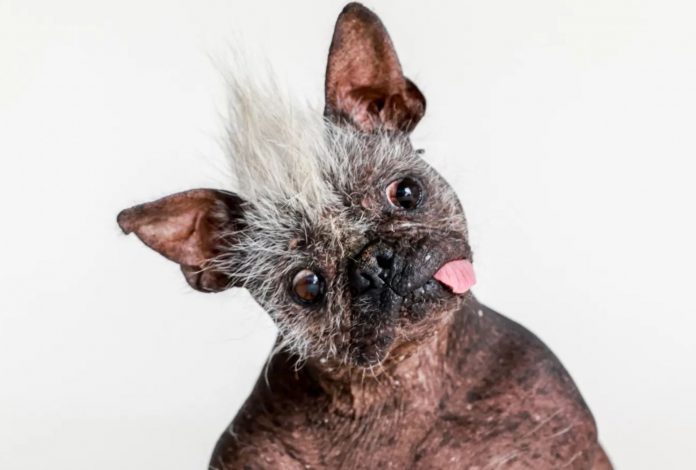 The World’s Ugliest Dog Contest once again graced the Sonoma-Marin Fair in Petaluma last weekend, and this year’s winner is as ugly-cute as they come.

Mr. Happy Face is an 18-year-old Chihuahua-Chinese crested mix. His “crest” is a bit scraggly, his tongue sticks out, and his head seems to be on crooked. But his human caretaker Janeda Banelly says that when she adopted him in Arizona last year, he was “he was the happiest creature that [she] had ever met.”

The dog landed in a shelter after living in a hoarder’s house and scrounging for food, and he had multiple tumors and health issues, but Banelly writes on the contest site, “He hobbled up to me and chose me.  I vowed that day, he would be so loved that he would never remember how awful his previous life had been.”

The vets at the shelter had given him only a couple months to live, but he’s survived so far since his August 2021 adoption.

“Love, kindness and mommy kisses have helped him defy the anticipated short life that we all expected him to have with our family,” Banelly says. “His hobbies are being fearlessly adorable, invoking his elder privilege amongst his four-legged and three-legged fur siblings and eating stinky things.”

Second prize at Friday’s Ugliest Dog competition went to a Pekingese distemper survivor named Wild Thang. Some of the other winners actually weren’t that ugly at all, and you can see them here. The Today Show footage from Saturday is below.

The World’s Ugliest Dog Contest was born in Petaluma in the early 1970s, and contest winners have been recorded since 1976 — with the annual contest becoming fodder for national morning television broadcasts since at least the 1990s. It became part of the Sonoma-Marin Fair in 1988, and has been sponsored by Animal Planet since 2006.

“The annual World’s Ugliest Dog® Contest is not about making fun of ‘ugly’ dogs, but having fun with some wonderful characters and showing the world that these dogs are really beautiful!” the contest organizers say. “A good many of the contestant dogs have been rescued from shelters and puppy mills and the contest has done much to raise awareness for adoption of dogs, and that no matter their physical detractions, these animals are loving companions.”

The contest continues to advocate for pet adoption, and as the organizers say, it “has been a testament that all dogs do not have to meet AKC pedigree standards to be man’s (or woman’s) best friend.”