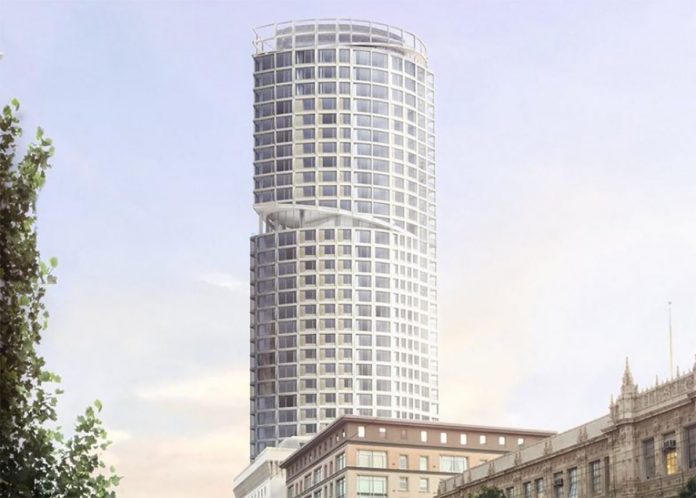 Days before its entitlements are set to expire, a very tall proposed residential tower at Van Ness and Market is headed before the Planning Commission this week, now as a significantly larger, all-rental property.

The tower dubbed One Oak (technically 1500-1540 Market Street) has been on the drawing boards since 2012, when it was envisioned as a very different tower designed by Getty Center architect Richard Meier. The property, which is currently still home to a parking lot and a doughnut shop, changed hands in 2014, when Build Inc. bought it and brought in Norwegian architects Snøhetta — who designed the SFMOMA renovation and the Chase Center — to draft a new plan. Initially envisioned as 37 floors of condo units with retail on the lowest level, the building was sent back to Planning for new approvals last summer, bumping up the unit count likely for reasons of financial feasibility.

As the SF Business Times now reports, those revisions are up for approval at the Planning Commission meeting on Thursday. And rather than the 453 condo units Build was seeking last year, the plan is now for 460 rental units on 40 stories — a mix of studio, one- and two-bedroom apartments averaging 767 square feet, with larger units sizes nixed in the redesign.

The potential reapproval comes just in time as the property’s entitlements, originally bestowed in 2017 and extended two years until this month, are set to expire.

Rendering of the tower’s base at Van Ness and Market, via Snohetta

One question will surely be how much of the project will be designated affordable, and given market conditions, Build will likely be aiming toward the low end of the acceptable range.

Build founder Lou Vasquez tells the Business Times that even though switching the plan from condos to rentals is less profitable overall, “There is a broader audience in the equity and debt markets for rentals in San Francisco.” In other words, it was all about financing the project and not having it fall through if, say, the condo market continues to tank.

This approval comes amid a slew of stalled projects around this intersection of Van Ness and Market, known in developer and planning circles as The Hub because of the increased height limits that the city has approved for these four corners.

And it also comes as rents in the city continue to be below pre-pandemic levels, and as the for-sale residential market is significantly cooling off from earlier this year and last year. As the Chronicle reports today, homebuyer demand in the San Francisco Bay Area has fallen off considerably amid rising interest rates, and properties are not selling for $1 million over asking the way they were just a couple of months ago.

Meanwhile, as a city, San Francisco is under a state-mandated deadline to approve 82,000 new homes in the next nine years, by 2031.

Previously: One Oak Project at Foot of Van Ness Seeks to Add 150 Units