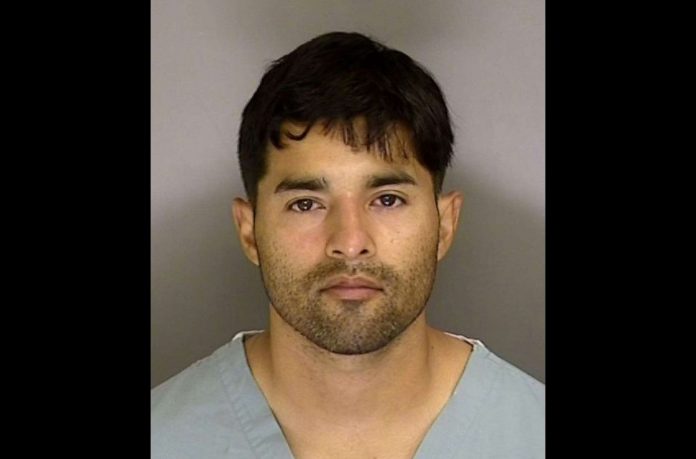 Weeks after taking a guilty plea in the killing of a federal security officer, former Air Force Sergeant Steven Carrillo has pleaded guilty in a state murder case involving the murder of a Santa Cruz sheriff’s deputy and the attempted murder of four other officers.

In mid-2020, at the height of both the pandemic and the civil unrest after the murder of George Floyd, 33-year-old Steven Carrillo was wrapped up in the online world of the loosely affiliated Boogaloo movement. The movement, largely based in Facebook groups and other online forums, is centered on the idea that all law enforcement is government tyranny, that a second Civil War is coming, and in particular federal law enforcement agencies are deserving of militia-style attack.

Carrillo began a rampage on the second night of protests and civil unrest in downtown Oakland, in the wake of Floyd’s death, on May 29, 2020. Along with an accomplice he met online who served as his driver, Carrillo traveled from his home in Ben Lomond, near Santa Cruz, to Oakland in a van packed with weapons. Hoping to pin his crimes on the nearby Black Lives Matter protesters, Carrillo shot at two federal security guards standing outside the Ronald V. Dellums Federal Building in Oakland, killing one of them, 53-year-old David Patrick Underwood.

Federal law enforcement around the Bay Area were soon on the hunt for Carrillo and his van. The accomplice, Robert Alvin Justus, Jr., had turned himself in and told the feds what he knew. Days later, neighbors reported the presence of a weird white van in Ben Lomond with what looked like explosives inside.

Santa Cruz County Sheriff’s Sgt. Damon Gutzwiller was among the first law enforcement officers to spot the van on June 6, 2020, possibly as it was trying to leave the area. At a press conference at the time, Santa Cruz County Sheriff Jim Hart said that Gutzwiller and his partner were pursuing the van until it pulled into a driveway — presumably Carrillo’s — on Waldeberg Avenue in Ben Lomond. And this is where things took a turn for the movie-dramatic, and once again tragic. Carrillo exchanged fire with Gutzwiller and as many as four other law enforcement officers, including members of the CHP and FBI, after staging an ambush attack involving improvised explosives and multiple weapons — having been expecting, clearly, that law enforcement would arrive.

Carrillo was hit in the leg, and after Gutzwiller was fatally shot, he escaped on foot to, ultimately to a nearby cannabis dispensary where he was apprehended by citizens who disarmed him and held him down. While hiding behind a car at one point, he scrawled the messages “Boog” and “stop the duopoly” in his blood on the car.

When deputies ultimately took Carrillo away, he reportedly screamed, “This is why I’m sick of these god damn police. This is what I’m sick of.”

On Monday, in a Santa Cruz court, Carrillo entered his guilty plea.

“The plea today, to life in prison without the possibility of parole, will ensure that the defendant will spend the rest of his life in prison where he belongs,” said Santa Cruz County District Attorney Jeff Rosell, per KRON4.

“The Boogaloo movement revolved around the desire for a violent overthrow of the government and starting a second civil war and resulted in violent attacks on law enforcement across the country,” Rosell said.

“Our hearts go out to all Santa Cruz County law enforcement officers affected by the horrific events on June 6, 2020, in particular the Gutzwiller family. Although nothing can bring Sgt. Damon Gutzwiller back, we hope that today can bring some measure of justice for everyone touched by this tragedy,” Rosell added.

In addition to this life sentence, which will officially, be handed down on August 26, Carrillo took a plea deal earlier this month in the federal murder case, and received a sentence of 41 years.