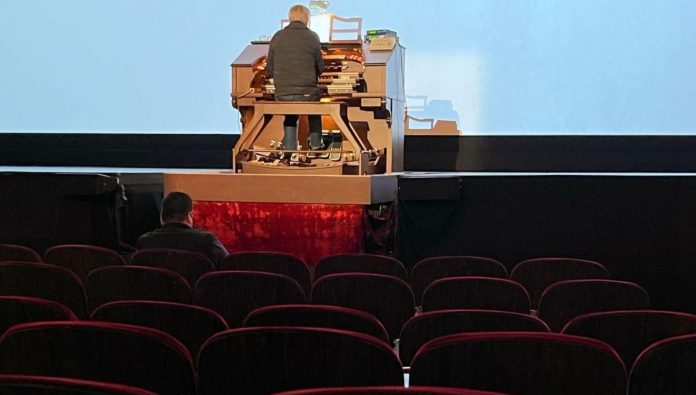 The Castro Theatre’s New Organ Is Still on Track For Installation By Next Year, Organist Not Going Anywhere

Amid all the hubbub and grousing about the future of the beloved Castro Theatre, one question has lingered that was surely a critical one for many fans of the old movie house: What will happen with the organ and the theater’s resident organist of 44 years, David Hegarty?

Another Planet Entertainment, the local concert-promotion outfit that operates the Fox Theater in Oakland, the Greek Theater in Berkeley, and both Bill Graham Civic Auditorium and The Independent in SF, signed on earlier this year to become the full-time operator of the Castro. There was immediate anxiety and not a little bit of protestation from community groups, most of them worrying that the traditions of the Castro being an LGBTQ safe space and performance venue, as well as a repertory movie house, would be lost.

Another Planet has tried to give assurances that while some things may change in turning the theater into a venue more friendly to live music and comedy shows, they will keep the place open for local performers like Peaches Christ, and for local film festivals, which use the Castro throughout the year as their biggest house. How often the place will show movies, said Another Planet CEO Gregg Perloff in an interview with Hoodline, will depend on demand.

“If people want to see repertory film, they’re going to see it,” Perloff said. “[But] it doesn’t help anyone if 12 people show up to a film.”

Hoodline also subsequently reported on plans to remodel the ground floor of the theater significantly, removing all the old movie-house seats and replacing them with tiered platforms for standing-room shows — with removable seats able to be brought in, a la the Fox. Since then, a group of dedicated Castro preservationists has formed, intending to form an official nonprofit, with a view toward blocking such changes and maintaining the place as more of a movie house.

But we can at least rest assured that Another Planet Entertainment does not want to lose one of the most essential aspects of the Castro, the organ. Few grand old movie houses around the country still have organs set up to play pre-show music — or the entire soundtrack in the case of silent films — and this is one thing that has always made movie-going at the Castro special.

As Heather Knight reports in the Chronicle, in a column that’s trying to aim for positivity amid local and national strife, Hegarty will continue his organ playing before movie screenings at the Castro at least until renovations begin. (And those are subject to city approval, and with the aforementioned organizing by preservationists could see some delays.)

Knight notes that while Hegarty, 77, was largely out of a job during the pandemic, he’s back to making a living through his Castro appearances, as well as at a church in San Mateo.

He’s been playing a smaller organ for several years — still attached to the theater’s immense pipe system — after the owner of the Mighty Wurlitzer that had been on loan there took that organ back. As SFist reported back in 2019, Hegarty went on a fundraising drive for a new organ, a digital-pipe hybrid that would be the largest of its kind in the world, and that has been in fabrication and in planning ever since. Hegarty now tells the Chronicle that the installation of that has been put off until next year, to coincide with the reopening of the renovated theater.

Mary Conde, vice president of Another Planet, says that the company never had any intention of removing the organ. Also, so tells the Chronicle that they’re aiming to have renovations complete and the theater reopened by summer 2023. Those renovations, as we learned earlier, include upgrades to sound, electric, and HVAC systems, as well as cosmetic fixes like the restoration of the ceiling and murals to their original “Timothy Pflueger glow.” (Renowned local architect Timothy Pflueger designed the Castro, in addition to grand, ornate, often Deco-style buildings like 140 New Montgomery, 450 Sutter, and the Paramount Theater in Oakland.)

But will they hit that deadline? Hard to say. And as for how many times you can hear Hegarty doing his opening organ-playing at film screenings this summer and fall, the current Castro Theatre schedule remains fairly light on screenings. There’s a tribute to Gremlins and Gremlins 2 on July 16, the 42nd Annual Jewish Film Festival July 21-25, and Hitchcock’s Vertigo is screening on September 3.

Also, reassuringly, Peaches Christ has the theater booked for Drag Becomes Her co-starring Bendelacreme and Jinkx Monsoon on August 27. And Rupaul’s Drag Race star Shangela will be bringing her tour to the theater on December 7 — so it looks like renovations may not be scheduled to start before then.

June was full of screenings at the theater, with the annual LGBTQ-focused Frameline Film Festival anchored there for two weeks, and also multiple events celebrating the 100th birthday of the theater itself.

Here’s Hegarty playing the song he always plays last, just before the lights go down: “San Francisco” made famous by Jeannette McDonald and later by Judy Garland.