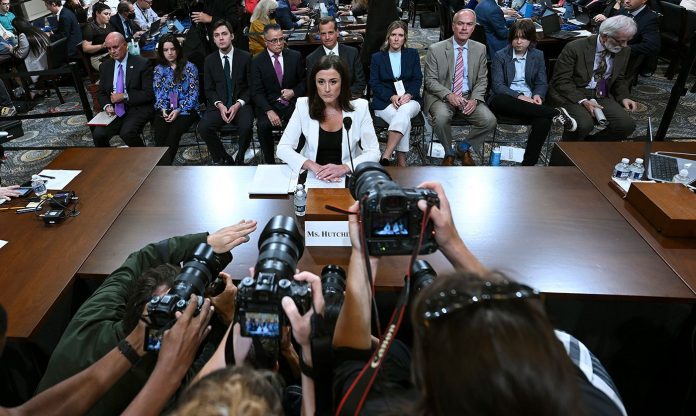 Trump is clearly upset by the implications — and actual truth? — behind testimony on Tuesday by a bombshell witness to the inside dealings on January 6th, because why else would he go full Twitter rant on his barely relevant alt-right app?

The committee appeared to have something big up its sleeve when it announced, just 24 hours prior, a previously unscheduled hearing Tuesday based on “recently obtained evidence.” As the New York Times now reports, that all came out of a fourth interview with Cassidy Hutchinson, who worked as an aide to Mark Meadows in the latter days of the Trump White House. Hutchinson reportedly retained new legal counsel, and came forward with previously undisclosed, smoking-gun-level details about things that Trump, Meadows, and others said and did behind closed doors on January 6th, 2021, as a mob raged at the U.S. Capitol.

“Ms. Hutchinson is justifiably proud of her service to the country as a special assistant to the president,” said Hutchinson’s legal team in a statement Tuesday. “While she did not seek out the attention accompanying her testimony today, she believes that it was her duty and responsibility to provide the committee with her truthful and candid observations of the events surrounding Jan. 6. Ms. Hutchinson believes that Jan. 6 was a horrific day for the country, and it is vital to the future of our democracy that it not be repeated.”

Members of the House January 6th Committee say they were concerned for the personal safety of former White House aide Cassidy Hutchinson, which was why her bombshell testimony remained largely secret until Tuesday.

Among the details Hutchinson revealed in solo testimony today — which was accompanied by narration from Rep. Liz Cheney and video of the interview she gave to the committee — are direct quotes from Trump that include him allegedly saying of the mob, “They’re not here to hurt me,” and expressing no concern about the fact that they were armed and out for blood.

Trump also reportedly said VP Mike Pence “deserve[d] it” when the mob was chanting “Hang Mike Pence,” and Hutchinson said that Trump told other officials to call off any security trying to crack down on insurrectionists armed with weapons.

Allegedly upset that the crowd for his “Stop the Steal” rally wasn’t big enough, Trump reportedly said, “I don’t fucking care that they have weapons,” and “take the fucking mags away,” referring to the magnetometers being used at the rally gates to detect people carrying weapons.

Hutchinson also relayed a bombshell story, secondhand, told by Tony Ornato, then-White House deputy chief of staff, about Trump trying to wrest control of the steering wheel of the presidential limo to take him directly to the Capitol after his rally speech. There is evidence that the Secret Service was trying to strategize about how to get him there, but ultimately a decision was made to override his wishes, apparently. Hutchinson says, via Ornato, that Trump allegedly screamed, “I’m the fucking President. Take me up to the Capitol now,” and then tried to reach up front to grab the wheel.

Hutchinson’s testimony was also very damning for Meadows, depicting him scrolling through his phone and telling others that Trump didn’t want anything done as the mob was reaching the Capitol.

“This is the smoking gun,” says Solomon Wisenberg, a former deputy independent counsel in Ken Starr’s investigation of Bill Clinton’s impeachment, speaking to the Times. Wisenberg says this testimony may be the key to bringing seditious conspiracy charges against Trump and possibly others.

Bereft of his favored mouthpiece with an actual audience, Twitter, Trump went full rage-storm on his beleaguered app Truth Social today — an app he’s barely used himself until now, likely because it’s an embarrassment where no one is listening.

They’re listening today though, the few who’ve downloaded it, and reporters are stuck with screenshotting Trump’s Truth-storm, which will be familiar to anyone who followed his two impeachment hearings and his million-and-one attacks on anyone who ever criticized him publicly before and during his presidency when he still had a Twitter account.

“I hardly know who this person is,” Trump says, “other than I heard very negative things about her (a total phony and a ‘leaker’).”

See for yourself. Would he be bothering to rage on that dumb fucking app if this weren’t so damning — legally and politically — for him?

Trump himself has refused to answer the committee’s questions.

All of these posts are about Hutchinson's testimony.

Not particularly sorry this is blurry; you're not missing much. pic.twitter.com/IFvfL8I4Nj

To underscore the possible panic in the Trump camp, check out this mafioso shit!!

Top image: Cassidy Hutchinson, a top former aide to Trump White House Chief of Staff Mark Meadows, takes her seat following a break as she testifies during the sixth hearing by the House Select Committee to Investigate the January 6th Attack on the U.S. Capitol in the Cannon House Office Building on June 28, 2022 in Washington, DC. The bipartisan committee, which has been gathering evidence for almost a year related to the January 6 attack at the U.S. Capitol, is presenting its findings in a series of televised hearings. On January 6, 2021, supporters of former President Donald Trump attacked the U.S. Capitol Building during an attempt to disrupt a congressional vote to confirm the electoral college win for President Joe Biden. (Photo by Brandon Bell/Getty Images)

Facebook
Twitter
Pinterest
WhatsApp
Previous articleThe Castro Theatre’s New Organ Is Still on Track For Installation By Next Year, Organist Not Going Anywhere
Next articleGreat America’s Land Sold to New Owners, It Will Close in Six Years or ‘Up to 11 Years’