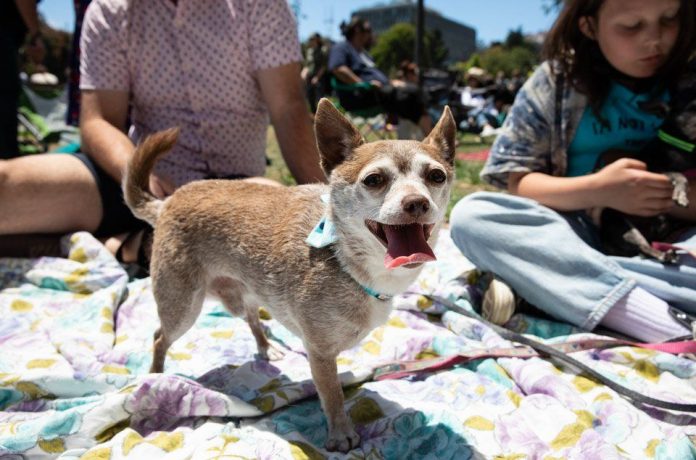 Amputee dogs had their day again in Duboce Park Sunday, as the 11th annual Three-Legged Dog Picnic added new features like a dog trick show and a costume parade, and we’ve got pup-arazzi photos of the joy they unleashed.

The annual Three-Legged Dog Picnic in Duboce Park was understandably missing an installment in 2020, but hopped back to action last summer. On Sunday, the 11th annual Three-Legged Dog Picnic returned with a brand new website, plus new featured events scheduled like a dog trick show and a costume parade, highlighting the skills and cuteness of these resilient rovers who’ve rebounded from some ruff experiences.

While the event’s “Prizes, but no contest” philosophy remains in place, Sunday’s three-legged dog picnic introduced new features, like a dog trick show. “Wallace took the cake with his tricks,” Corsick says of the hoop-jumping daredevil above.

There was also a dog costume parade, described by Hoodline as the “smallest ever parade of ‘handi-capable pups’ through the park led by Craig G. Hermes, volunteer lead at Muttville, a dog rescue nonprofit dedicated to adopting out senior dogs.”

“It was a 10 minute endeavor,” Corsick says. “He probably had 25-30 dogs behind him. Smiles everywhere. It’s definitely going to be a staple in the coming years.”

This fairly loose and unstructured dog meetup started 11 years ago, when Corsick was inspired by the sight of two three-legged dogs chasing a frisbee, and thought she’d make this a thing. She put up a few flyers, but only one dog attended the first year.

“I just kept putting up flyers in neighborhoods all over the city, each year it grew,” she tells us. “It grew from one person showing up with their dog, to 35-45 dogs.” This year attracted folks from Muttville, as well as prizes donated by Shipyard K9 Supplies, Animal House SF, and Jeffrey’s Natural Pet Foods.

It is probably therapeutic for the tri-pawed pups to hang out together, but it is certainly therapeutic for their human companions to get together. “To have a community of people to get together around three-legged dogs, and then to make it inclusive of all dogs, I shouldn’t have been surprised honestly, but I was,” one pup’s companion Jennifer tells SFist. “I was blown away.”

“I saw dogs in tutus, I saw elder three-legged dogs, it was fabulous,” she adds.

When you speak to folks who brought their three-legged dogs to this event, it’s notable that the vast majority of them adopted the rescue pups after the pooch had already had the amputation. These people consciously chose to take in dogs with significant medical conditions, plus all the extra work, cost, and TLC that all en-tails.

If you’re someone like that, there are plenty of needy and senior dogs up for adoption at Muttville and Family Dog Rescue.