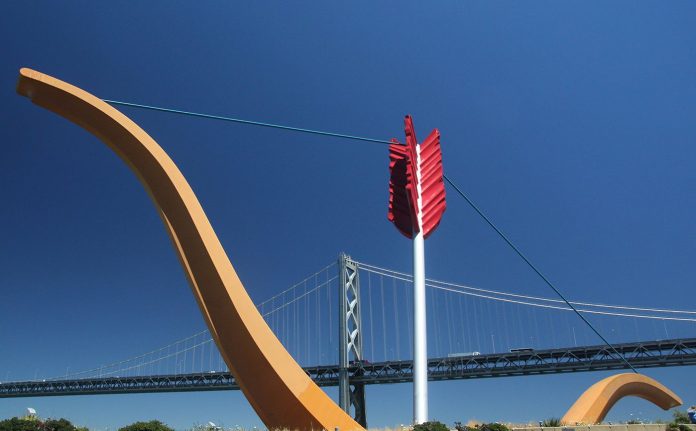 The 60-foot-tall bow and arrow in Rincon Park along the Embarcadero, partially buried in the ground and titled “Cupid’s Span,” remains a curiosity to tourists and locals alike, 20 years after its installation. But the sculpture is one of many everyday objects reimagined at grand scale by the artist Claes Oldenberg and his late wife, and he has just died at the age of 93.

“Cupid’s Span” first appeared along the Embarcadero in late 2002, in the heady redevelopment days that also saw the grand reopening of the Ferry Building as a restaurant hub and marketplace. It was the creation of Oldenberg and his wife and collaborator of three decades Coosje van Bruggen, and the piece was gifted to the city by Gap founder Don Fisher and his wife Doris, who were major collectors of 20th Century art until Don’s death in 2009. (Their collection is now on long-term loan to SFMOMA, and much of it is on permanent display there.)

Oldenberg and van Bruggen took as their inspiration the notion that San Francisco is talked of as a “city of love,” with the Summer of Love and such, and the song “I Left My Heart in San Francisco.” In an artists’ statement, the pair said, “Arriving at San Francisco airport, one is greeted with a recording by Mayor Willie Brown, which extols the city as a place with ‘heart,’ ” the artists wrote. “Countless songs and stories celebrate San Francisco as the realm of love.”

Thus, the bow and arrow are meant refer to cupid, but they removed the violent imagery of the actual arrowhead, putting it underground — “defunctionaliz[ing]” the weapon, as they put it.

As the New York Times discusses today in Oldenberg’s obituary — van Bruggen preceded him in death by 13 years, passing away from cancer in 2009 — the pair collaborated on more than 40 projects, including “Spoonbridge and Cherry” at the Walker Art Museum’s sculpture garden in Minneapolis, and “Shuttlecocks,” a series of four enormous badminton shuttlecocks on the grounds of the Nelson-Atkins Museum of Art in Kansas City.

“Plantoir, Blue,” a gigantic blue trowel, made a brief appearance at Rockefeller Center in New York this past spring.

People walk past the “Plantoir, Blue” sculpture at the Channel Gardens in Rockefeller Center on March 22, 2022 in New York City. A sculpture titled “Plantoir, Blue” by artists Claes Oldenburg And Coosje Van Bruggen officially opened to the public today at Rockefeller Center. The sculpture, which is the first public installation in New York City in more than 20 years for the artists, will be on view from March 18 through May 6, 2022. (Photo by Michael M. Santiago/Getty Images)

“Spoonbridge and Cherry” by artists Claes Oldenburg and Coosje van Bruggen in the Minneapolis Sculpture Garden both before and after a snowstorm on April 9, 2019. (Photos by Stephen Maturen/Getty Images)

Rather than depict people, Oldenberg consistently focused on objects and notions of human desire for them. “My intention is to make an everyday object that eludes definition,” he once said, per the Times. “I’ve expressed myself consistently in objects with reference to human beings rather than through human beings.”

In another quote, Oldenberg said, “A catalog could be made of all such objects, which would read like a list of the deities or things on which our contemporary mythological thinking has been projected. We do invest religious emotion in our objects. Look at how beautifully objects are depicted in ads in Sunday newspapers.”

Oldenberg’s work has long been seen as related closely with the Pop Art movement of Andy Warhol, Roy Lichtenstein, and others — and unlike Lichtenstein, who used comic strip forms for his large canvases, Oldenberg actually worked briefly as a professional comic strip artist in Chicago in the 1950s.

Born in Sweden in 1929, Oldenberg grew up partly in the U.S., with a diplomat father who was stationed in Chicago starting in 1936. He went on to study literature and art history at Yale University, and then returned to Chicago to the Art Institute in the early 1950s. He became a U.S. citizen in 1956, at which point he was living in New york. Oldenberg died Monday at his studio in New York’s SoHo neighborhood, and he is survived by two stepchildren, Paulus Kapteyn and Maartje Oldenburg, and three grandchildren.