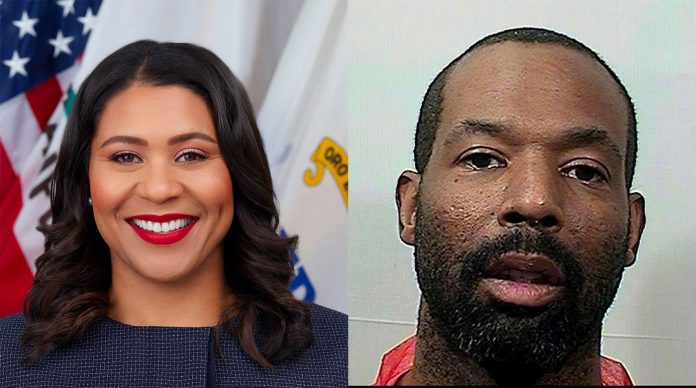 A resentencing request by Mayor London Breed’s older brother, who’s been in jail for 22 years for a manslaughter and robbery case, has become something of a political hot potato.

Napoleon Brown, Breed’s brother whom she has publicly advocated for in the past and for whom Breed served as an alibi witness in his 2005 trial, is serving a 44-year sentence for a 2000 crime spree that ended in the death of his girlfriend. Brown was convicted of involuntary manslaughter, armed robbery, and carjacking and sentenced to 42 years — but as SFist has noted previously, two years were added to Brown’s sentence because he was caught doing heroin in prison.

The crime was a pretty brutal one. Brown was convicted of robbing a Johnny Rockets on Chestnut Street, and subsequently pushing his 25-year-old girlfriend, Lenties White, out of the getaway car while escaping on the Golden Gate Bridge — and White was then struck and killed by a drunk driver in another vehicle.

Breed testified on her brother’s behalf, before joining the SF Board of Supervisors, that she remembered him being home the night of the crimes, which apparently the jury did not buy.

In late 2018, Breed lobbied outgoing Governor Jerry Brown to commute Brown’s sentence, and that was denied. (In the request, Breed alluded to her brother’s guilt, saying that Brown’s “decisions, his actions, led him to the place he finds himself now.”) But in 2019, a judge agreed to allow Brown’s resentencing to be considered — based in part on changes to state law about resentencing of murder convictions, which can happen at the request of a district attorney or the Parole Board. Both interim DA Suzy Loftus in 2019 and recalled DA Chesa Boudin opposed any resentencing. The state law, though, pertains to what should be classified as murder, with accomplices sometimes getting lighter sentences, and involuntary manslaughter cases likely aren’t part of that.

Now, as the Chronicle reports, DA Brooke Jenkins’s office has filed a request for state Attorney General Rob Bonta to weigh in on the resentencing, which lawyers tell the Chronicle would be unusual. According to Boudin’s former chief of staff, Kate Chatfield, others had put in requests to the AG’s office to have cases transferred after Boudin — a former public defender — was elected DA, but the AG’s office consistently told them to simply “wall off” any attorneys with conflicts in the case, but to still handle them without the AG’s help.

Jenkins has now fired the two attorneys who would have overseen Brown’s case, Chatfield and post-conviction unit head Arcelia Hurtado, and neither Jenkins nor anyone she hires can likely handle it due to a perceived conflict — since Jenkins owes her job to Breed.

It sounds like the case will bounce back to the DA’s office regardless, and it seems like Jenkins, were she not disqualified from dealing with the case, wouldn’t want it anyway — given her vocal support for tougher sentences for violent offenders.

Last month, before Jenkins was hired, Brown’s attorney spoke to ABC 7 saying his client was feeling hopeful that “he will get out sometime in the foreseeable future.” But that foreseeable future might still be 22 years from now.