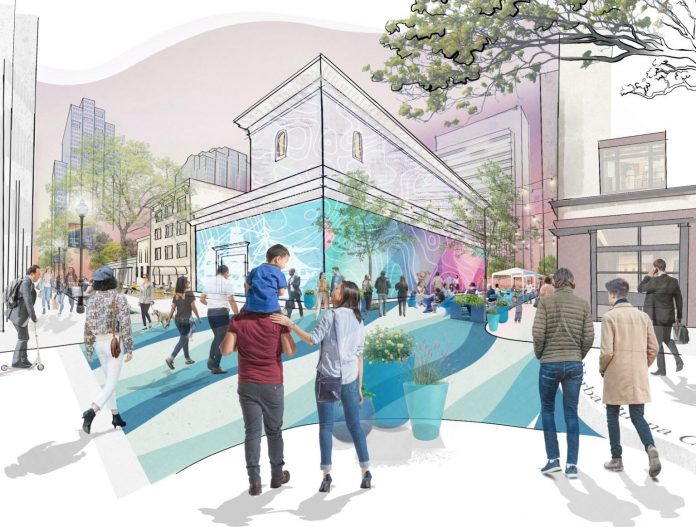 Would more street closings and beautified public spaces get you back to a moribund downtown San Francisco? One business group is betting so, but the plan is still mostly aspirational and does not yet have a price tag attached.

It is well established that downtown San Francisco has seen anemic foot traffic during the pandemic, because no one wants to go back to the office. And a very positive flip-side to that is our exceptionally low COVID-19 death toll compared to other U.S. cities, so hey, maybe that caution has paid off? Still, you can’t help but feel for employees of the decimated downtown hospitality industry, and the workers at cafes, bánh mì shops, and Financial District bars whose incomes have been walloped by the loss of downtown workers.

Back in March, Mayor Breed tried some effort to get businesses to force their employees into a “pledge” to return to the office, but the spread of Omicron subvariants rendered that effort an afterthought. Yet now the Chronicle reports that one downtown Community Benefit District (CBD) hopes to offer carrots rather than sticks to get people back downtown, with an ambitious plan for “street closings and outdoor gathering spaces” in downtown SF.

The CBD is called Downtown San Francisco, and their press release announcing the plan calls “for reclaiming space in streets and alleyways to create a pedestrian paradise; bringing downtown’s unique asset of many privately owned public open spaces to their full potential; adding street trees, planters, and sidewalk vegetation in a district with limited public parks, among many others.”

The Chronicle rightfully notes that this aspirational plan “was not created in partnership with city leadership,” and adds that the groups pushing it have not said “how much the plan would cost if all of its proposals became a reality.” So it’s basically just a parlor game of theoretical renderings and ideas.

But the CBD Downtown SF has successfully iterated on that holiday projection mapping effort last December, and the designs are from Sitelab Urban Studios, who designed the 5M office and condo project and the proposed Stonestown Galleria housing village, so these are credible people.

The above map shows which specific spots they propose to revitalize. Yes, they are all in the Financial District and immediate surrounding areas. But that’s the area within Downtown SF’s CBD district, so that is the area you would expect them to advocate for.

But with all of these proposals for “economic revitalization” and “activating spaces,” COVID-19 is still in charge here. Pretty up downtown all you want, people aren’t going back to offices in large numbers until the pandemic is under control — and office work may be something of a couple-days-a-week phenomenon going forward anyway.

We can “reimagine” downtown all we want, it still may be years before downtown looks anything like it did three years ago. And none of these rebound plans ever seem to take that into account much.