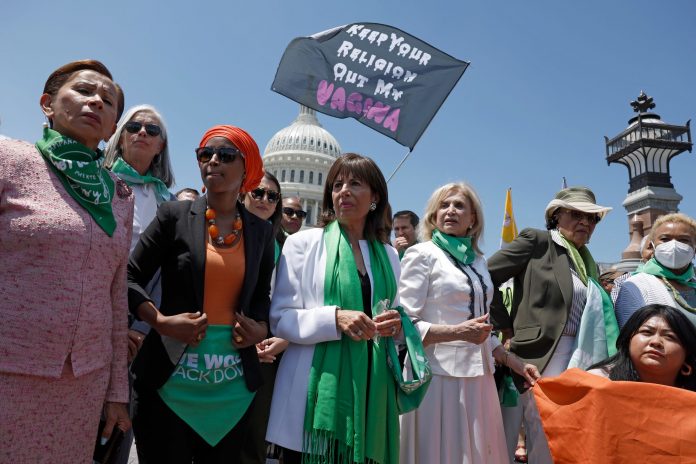 If you need another reason to love Peninsula and East Bay congressional representatives Jackie Speier and Barbara Lee, they just blocked a street and got arrested Tuesday at a Washington, D.C. abortion rights rally.

It is a fair argument to complain that in the wake of the Supreme Court overturning Roe v. Wade, that Democrats in Washington, D.C. aren’t doing much of anything. But that argument would not fairly apply today, as 17 congressional Democrats got arrested Tuesday for blocking the street at an abortion protest outside the Supreme Court building, according to CBS News, among them AOC and Ilhan Omar.

Alexandria Ocasio-Cortez was arrested at an abortion rights protest outside the Supreme Court.

The Capitol Police announced shortly after 12 noon ET Tuesday that “We made a total of 35 arrests for Crowding, Obstructing or Incommoding,” and that “That arrest number includes 17 Members of Congress.”

As several folks noted on Twitter, that’s more people than the Capitol Police arrested on the day of the January 6 insurrection.

The fallout from SCOTUS's draconian decision to obliterate the right to abortion is already being felt nationwide with government mandated pregnancy. Today, I am marching outside SCOTUS w/my sisters for abortion, women's rights & more. We won't back down! pic.twitter.com/wy7oyV3IK1

The above tweet from Rep. Speier was apparently posted a couple hours before the arrests. But a subsequent tweet later in the afternoon acknowledges her arrest, declaring “Proud to march with my Democratic colleagues and get arrested for women’s rights, abortion rights, the rights for people to control their own bodies and the future and our democracy!”

One has a moral responsibility to push back against unjust laws.

Today, I am standing up for reproductive freedom and bodily autonomy in solidarity with the millions who have had their rights stripped away by inhumane policies. pic.twitter.com/EnS8YEbc8t

Similarly, the above tweet from Rep. Barbara Lee was posted prior to the arrest, but does show her blocking the street, which is what she was arrested for. But one can clearly see Rep. Lee being arrested at the :37 mark of the NBC Bay Area video below.

More than a dozen Democratic members of Congress, including Bay Area Reps. Jackie Speier and Barbara Lee, were arrested during a protest in the nation's capital over the Supreme Court's decision to overturn Roe v. Wade. https://t.co/39QsBzc5jI pic.twitter.com/MuZsdUk4K8

Yeah, yeah, yeah, this was all just a glorified photo op. But it was a good photo op, they got arrested! So who photo-opped it best?

A total of 34 people were arrested by U.S. Capitol Police at the protest, including Reps. Alexandria Ocasio-Cortez, Ilhan Omar and Alma Adams. https://t.co/dS19kOt7zc

Michigan Rep. Andy Levin (D) certainly scores well by impersonating the January 6 Josh Hawley insurrection fist. But the clear winner here is Rep. Ilhan Omar, whom NBC News has this fabulous photo of her smiling for the camera while the cops process her arrest paperwork.