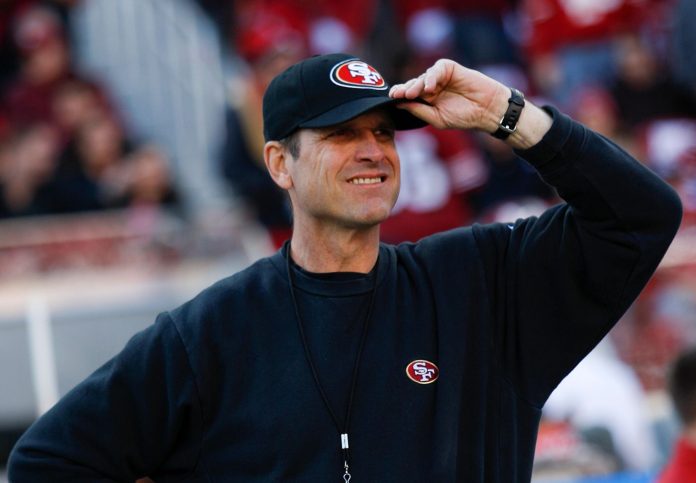 “Let the unborn be born,” proclaimed the Catholic former NFL coach who’s now back to coaching college ball at University of Michigan — and perhaps it’s best he saved this proselytizing for after he left the Bay Area.

Jim Harbaugh, the coach of the San Francisco 49ers from 2011 to 2014, spoke at a charity event Saturday for the local anti-abortion organization Plymouth Right to Life in Plymouth Michigan — which was held in affiliation with a local church, Our Lady of Good Counsel Catholic Church. The speech was reported on by the publication Detroit Catholic, and it has subsequently been widely re-reported, perhaps because major league sports coaches, even former ones, don’t tend to be so outspoken on hot-button issues like abortions.

“I love life,” Harbaugh reportedly said. “I believe in having a loving care and respect for life and death. My faith and my science are what drives these beliefs in me. Quoting from Jeremiah, ‘Before I formed you in the womb, I knew you. Before you were born, I set you apart. I appointed you as a prophet to the nations.’”

Harbaugh continued, “I have living proof in my family, my children and the many thousands that I’ve coached that the unborn are amazing gifts from God to make this world a better place. To me, the right choice is to have the courage to let the unborn be born.”

In tempering his religious passions, Harbaugh also said, “I recognize one’s personal thinking regarding morality of a particular action may differ from their thinking on whether government should make that action illegal.”

But, Harbaugh concluded, “Yes, there are conflicts between the legitimate rights of the mother and the rights of the unborn child. One resolution might involve incredible hardship for the mother, family and society. Another results in the death of an unborn person.”

Expect more famous, anti-abortion activists to “come out of the closet,” as it were, after their recent win at the Supreme Court. Harbaugh hasn’t made his views secret, but he last publicly commented on his abortion views in 2020, as The Hill reports, calling the procedure “horrendous.”

Harbaugh left the job at the 49ers to coach at U.Mich back in 2015. And he grew up partly in the Bay Area, having attended Palo Alto High School — though he was born in Ohio and liked to distance himself from California, culturally. It seems he was still living here, at least part time, up until last year though, because his former Atherton didn’t hit the market until last August.

Top image: Head Coach Jim Harbaugh of the San Francisco 49ers stands on the sideline prior to the game against the Arizona Cardinals at Levi Stadium on December 28, 2014 in Santa Clara, California. The 49ers defeated the Cardinals 20-17. (Photo by Michael Zagaris/San Francisco 49ers/Getty Images)