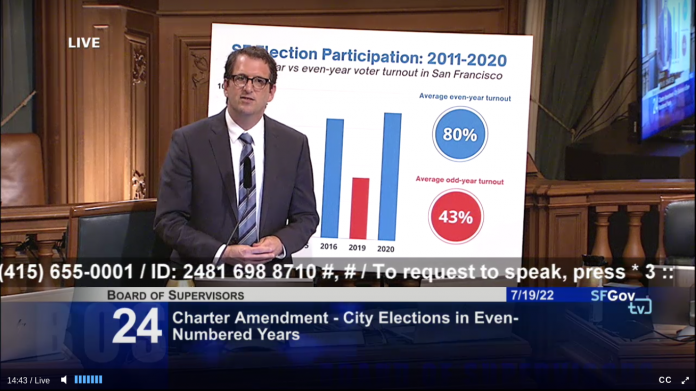 This November you will vote on which November you vote on who will be San Francisco’s mayor, as the Board of Supervisors approves Sup. Dean Preston’s ballot measure to move the SF mayoral election to presidential election years.

Below we see District 5 Supervisor Dean Preston at this afternoon’s Board of Supervisors meeting, presenting a chart that shows a striking disparity.  The average turnout in odd-year San Francisco elections is a dismal 43%. But turnout in even years, when we elect the president and/or our congressional representatives, is nearly twice that turnout at 80%. Preston wants to change that, and the board agreed, voting 7-4 Tuesday afternoon to approve a November ballot measure where SF voters could potentially move the mayoral election to the same year as presidential elections.

If it were passed, that means we would elect the San Francisco mayor, district attorney, and sheriff in 2024, instead of their currently scheduled dates in the November 7, 2023 election.

“This is a basic civil rights issue, it’s a voting right issue, and I believe very strongly that our city should be encouraging voter participation, not limiting it.” Preston told the board before Tuesday’s vote. “It is really, I think, shameful that we as a city are part of this dwindling number of cities that cling to odd-year elections.”

BREAKING: SF supervisors just voted 7-4 to put a measure on the November ballot that would move mayoral elections to presidential election years starting in 2024. The stated goal is to boost turnout, as sponsor @DeanPreston stressed in this graphic today pic.twitter.com/VwoQOSY2S8

Los Angeles and San Jose have already made this change. But more importantly, it acknowledges that voters of color vote far less in the odd-year elections; per Preston, Chinese voters had 81% turnout in 2020 compared to 41% in 2019, and for Latinx voters the disparity was even larger, at 82%-32% in those same respective years. “It is the same for all communities of color,” Preston said.

And that’s what motivated Supervisor Ahsha Safai to support this. “We are a city of immigrants, we always have been,“ Safai said before the vote. Safai, in particular, has always had to run in  a presidential election year. “I was never drowned out, in fact, it was a major benefit. I didn’t have to spend any time convincing people to go out and vote. All I had to do was convince them to vote for me.”

Those who voted against Preston’s measure objected to the timing, saying it was unfair for people and causes who were already gearing up for November 2023. “Many people, agencies, individuals, have been planning around the notion there would be an election next year,” Supervisor Rafel Mendelman pointed out. “I’m uncomfortable with getting rid of the election next year.”

Despite those objections, moving the mayoral election to 2024 will now be on your November 8, 2022 election ballot. Mayor Breed has opposed the measure (even though it gifts her an extra year in office!). And while it is a charter amendment, it will only require a simple 50%-plus-one majority to pass.

Related: There Could be Four Elections for This Same D-17 State Assembly Seat in 2022 [SFist]