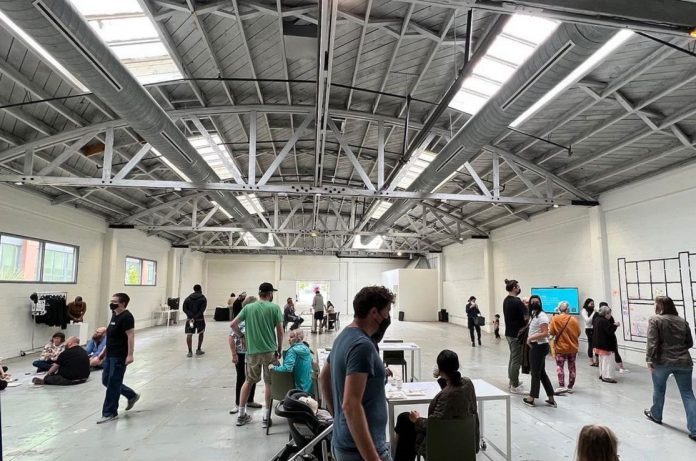 San Francisco’s newest art museum, the Institute of Contemporary Art San Francisco (ICASF), is readying for an October opening, and this week the non-collecting museum announces its latest philanthropic bequest.

First announced last fall, the ICASF has garnered interest from SF’s tech and venture-capitalist worlds, which have historically stood apart from San Francisco’s art and culture scene and the city’s established donor bases for the arts. Underwritten with $1 million in seed funding from Andy and Deborah Rappaport, the couple behind the five-year-old Minnesota Street Project, the ICASF is taking shape inside another building in Dogpatch, a former kids’ gymnasium at 901 Minnesota Street.

Also among the early donors were Instagram co-founder Mike Krieger and his wife Kaitlyn Trigger, who offered to fund the salary of museum director Ali Gass for the first three years. Gass previously served as director of the unaffiliated Institute of Contemporary Art San Jose.

The Chronicle reports that a new, unrestricted $1 million gift has just come in from venture capitalist David Hornik and philanthropist Pamela Hornik, who previously underwrote exhibitions at the ICA San Jose.

“It’s not that often that the opportunity comes along to be involved at the inception, the very start of a museum,” said Pamela Hornik in a statement to the Chronicle. “That opportunity, and my connection to Ali going back to our time together when she was curator there, was irresistible.”

The Horniks are collectors themselves, and others in the local art world tell the Chronicle that the couple has been deeply involved with the art institutions and artists — Pamela Hornik also serves on director’s advisory board at the Cantor Arts Center at Stanford, and as a trustee of the Berkeley Art Museum. Berkeley artist Lava Thomas tells the paper that the couple “have been incredibly supportive, not only to my own career, but to many artists, especially from marginalized communities and artists of color.”

The opening shows this fall at the ICASF will be exhibitions of work by Jeffrey Gibson, Liz Hernandez, and Ryan Whelan, and a group show titled “Resting Our Eyes,” curated by Tahirah Rasheed and Autumn Breon.

Like other unaffiliated ICAs around the country, including the one in San Jose that Gass previously worked for, ICA SF is taking a pragmatic approach to its mission — and being a non-collecting institution is part of that.

“Collections cost an enormous amount to display and preserve,” Gass told the Chronicle last year. “One of the tenets of ICA SF is to address issues of pay equity for artists and staff. Instead of an arms race of collecting, we are committed to paying artists and museum workers an above-average salary for our region.”

The buildout is nearing completion, and Gass says that the unrestricted gift comes just in time, as unexpected expenses keep arising.

The Institute of Contemporary Art San Francisco opens October 1 to the general public. Follow them on Instagram for more updates.